How Absorbed by Facebook is the Web Going to Get?

Facebook’s developer conference F8 doesn’t begin until Wednesday, but there is already plenty of news about the company’s plans coming out, and those plans reportedly involve Facebook consuming even more of your web experience.

Are you comfortable with Facebook dominating more of your online experience? Tell us what you think.

The New York Times says "people familiar with Facebook’s plans" say the company will introduce a "Like" button for publishers to put on their own web pages, as well as a toolbar. "The Like button will allow Facebook to keep a record of what a user linked to, providing the company with ever more data about people’s preferences," says the NYT. "Facebook, in turn, plans to share that data with Web publishers, so that a magazine Web site, for instance, may be able to show users all the articles that their friends like."

Facebook the company is being pretty tight-lipped about its plans ahead of the conference, but following speculation that it would use data from sites with the button/toolbar to target Facebook ads, a spokesperson for the company told the Financial Times, "All the products we are launching at F8 are focused on giving developers and entrepreneurs ways to make the web more social," said the spokesperson. "We have no announcements or changes planned to our ad offering and policies."

Some are expecting some interesting announcements at the conference regarding Facebook credits, the company’s virtual currency. As InsideFacebook reported the other day, the company has partnered with a couple of new offer providers so users can earn credits without having to pay directly, a move reporter Eric Eldon thinks could lead to increased spending on credits, which may become significant to not only Facebook e-commerce, but e-commerce in general, as more e-tailers look to capitalize on Facebook’s huge user base. Take a look at this new announcement from Facebook app Payvment to see what I mean. 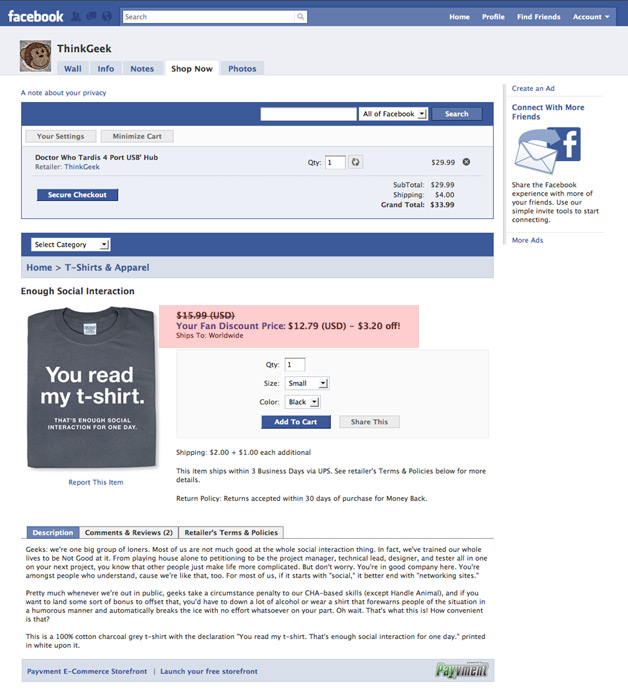 With regard to Facebook infiltrating more of the web per its expected announcements, the company still gets to deal with competition in this space. Twitter made its @anywhere platform widely available last week, for example. Google also released its official Buzz buttons for sites (while also finding a way to integrate Google Services for Websites into way more sites). Meanwhile, open web efforts are making significant progress (the first open cross social network implementation via the Salmon protocol was launched a couple weeks ago). Now you have Google, Yahoo, and MySpace participating in XAuth with Meebo.

Pete Cashmore, founder of the all things social media blog Mashable makes a great point about Facebook related to this. "It’s in Facebook’s interests to lock up your social graph, and it’s in your best interests that they don’t," he says. "If Twitter, Google or another player were to make your social graph portable, you wouldn’t be siloing all your information in Facebook — you could do whatever you please with it….The question that will decide Facebook’s fate: Can it keep the social graph locked up forever?"

The more Facebook becomes part of the fabric of the web, the more users may feel tied to it, but as Marshall Kirkpatrick recently suggested, Facebook could feel pressure to implement such open web protocols if enough of the community implements them. Facebook’s best interest is to keep users using Facebook itself, but considering Facebook already has such a significant share of the population, you have to wonder how much it would really lose open protocols were adopted.

As for F8, Facebook has released its schedule, which includes tracks for New Tools, Industry, Techniques, and Open Technologies. It will be very interesting to see what all announcements are made at the conference, there may very well be more we don’t even know about yet.

How much of your online use is going to be related to Facebook? Share your thoughts here.

Are You Wrong About What it Takes to Get Conversions?