Many analysts believe that Facebook will essentially declare war on Google later today, launching an email product that will compete with – and perhaps overthrow – Gmail.  So this morning, Experian Hitwise Research Director Robin Goad weighed in with some stats pertaining to the possible conflict.

Goad wrote, "As Facebook continues to grow it is increasingly becoming Google’s closest rival."  Then he provided the graph below, which pretty well proves that point. 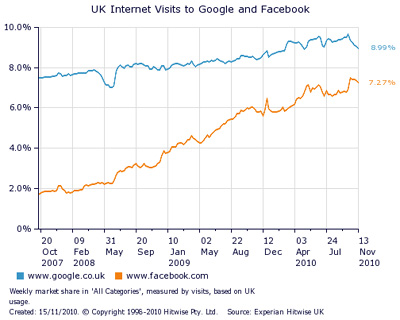 Next, Goad reasoned, "With such tight competition between the two online powerhouses it makes sense for Facebook to leverage its huge user base to branch out into other services other than social networking.  Email seems like a natural progression, especially as 9.78% of all visitors to Facebook in October visited an email service immediately before going to Facebook."

That’s encouraging news for Facebook supporters.  The thing is, though, that an email-related war between Google and Facebook might not amount to more than two also-rans fighting for scraps.  Apparently 58 percent of October’s email-related traffic headed for Hotmail, another 19 percent went to Yahoo, and Gmail saw less than five percent of visits.

Microsoft’s still very much in control of this industry, then, even if Bing hasn’t been able to pose much of a threat to Google’s search engine.

Stay tuned for more information about Facebook’s big announcement today, in any event.

There's More to Social Media For Small Businesses than ROI