A single high-profile deal has done wonders for LivingSocial’s popularity, according to a new Hitwise report.  The site, which trailed Groupon in terms of visits by a huge margin, closed the gap by a significant amount after offering $20 Amazon gift certificates for $10 last week.

A disclaimer: it’s of course far too early to say whether the traffic bump will be permanent.  People who are eager to save money may prove happy to go to whatever site can offer them the best bargain, meaning media coverage of another great deal could turn this all on its head in a single day.

Still, Bill Tancer wrote this afternoon, "In a previous post less then two months ago we analyzed the difference between Groupon and LivingSocial visitors.  At the time, visits to Groupon outnumber those to LivingSocial by a factor of 10-1. . . .  Fast forward to last week.  LivingSocial has closed the gap, now with over half the visits of group coupon leader Groupon." 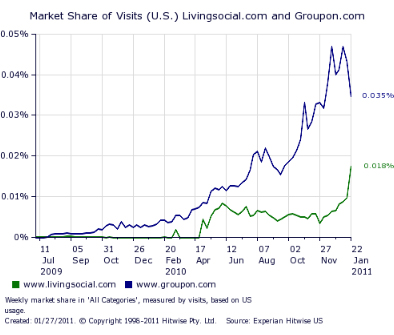 Then Tancer added, "LivingSocial’s 80% traffic surge last week (and Groupon’s 20% decline in the same time period) proves that the race for dominance in the group coupon space is far from over.  With LivingSocial still exhibiting a healthy component of early adopters, Google launching a competitive offer and rumors that Facebook might enter the fray, I think I would have taken the $6 billion."

It should be interesting to see where this goes.  Perhaps LivingSocial will get an acquisition offer of its own as Google tries to build up Google Offers.

Or Google Offers could just come out of nowhere and, with the support of the search engine giant (its market cap is $197.6 billion right now), take over the sector.

Layar Lowers the Barrier to Entry for Augmented Reality for Brands