As Facebook employees went back to work this week, they may have been smiling more (or at least less frowning less) than most other people returning from vacation.  Their site performed admirably over the holidays, actually attracting record-breaking amounts of traffic.

On Tuesday, we documented the fact that Facebook received more traffic than Google on both Christmas Eve and Christmas Day.  That made it the most visited U.S. site for the first time ever.

This afternoon, Hitwise’s Bill Tancer provided some more data.  He wrote, "Facebook was able, albeit by a slighter margin, to recapture the #1 position on Friday, New Year’s Day."  Tancer also created the graph you see below. 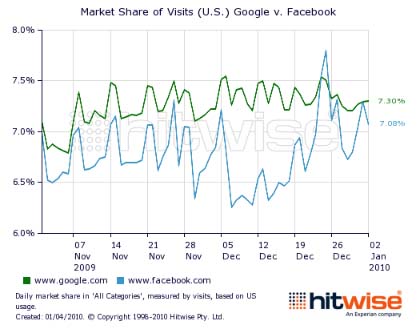 Obviously, it doesn’t look like Facebook’s destined to attract more individuals than Google on a permanent basis.  Still, the social network’s done quite well over the last couple of weeks, closing the gap that somehow opened up during the first half of December.

This repeat occurrence of Facebook beating Google on a holiday also creates the question of how often it’ll do so in the future.  Will a switcheroo occur on Valentine’s Day?  St. Patrick’s Day?  No Housework Day?  We’ll see.