Anyone who’s shocked that AOL is giving up on Bebo will probably feel a lot more understanding after viewing new stats from Hitwise.  Indeed, the real question a graph seems to raise is not whether AOL’s right to back away, but whether any potential buyers will surface.

View the carnage for yourself below.  As you can see, Bebo’s had rather few "up" weeks in the UK since June of 2007, even though Ireland was traditionally one of the markets in which it was most successful. 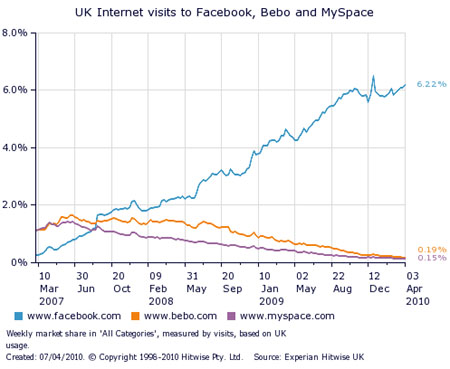 Facebook, meanwhile, has seen its popularity skyrocket, leaving it with a UK market share about 32.7 times larger than Bebo’s.

The news isn’t all bad for AOL and Bebo.  In his report, Hitwise’s Robin Goad pointed out that Bebo ranks fourth in the social networking category (which puts it ahead of MySpace), and 31st overall.  Lots of networks and companies aspire to that sort of prominence.

Still, the steadiness of the site’s decline isn’t likely to incite a bidding war.  AOL will be lucky to get back even a fraction of the $850 million it paid for Bebo in early 2008.

iPad Impresses More as a Symbol Than a Device