The “flabbergasted” biblical numerologist Harold Camping has emerged from seclusion and addressed the world about the still impending rapture.

Until a broadcast on Family Radio late last night, Camping had only said a few words about the fact that the world did not begin its tailspin towards destruction at 6 pm on May 21st. Those words were caught on tape, courtesy of NPR:

But last night, the 89-year-old fake prophet announced that the rapture was far from cancelled – but simply postponed. More specifically, he was not off on the dates. May 21st marked a more “spiritual” beginning of the end, and in five months the real end will come.

In Camping’s original prediction, the rapture was to take place on May 21st, sending the souls of some 200 million people to heaven. The world was then supposed to linger about in post-apocalyptic misery for five months, finally ceasing to exist on October 21st. It was a soft opening for the rapture, if you will.

Now, Camping is saying that there will be no lead up to the end, it will just happen on October 21st – a hard opening.

Camping, as quoted in the San Francisco Chronicle:

“Were not changing a date at all; we’re just learning that we have to be a little more spiritual about this. But on Oct. 21, the world will be destroyed. It won’t be five months of destruction. It will come at once.

Well, the Twitterverse is reacting as you would expect:

@Lord_Voldemort7
The Dark LordApparently the apocolypse is moved to Oct 21st, which also happens to be Kim Kardashian’s birthday. It’s all starting to make sense…

@FrankConniff
Frank ConniffThe Rapture pushed back to Oct. 21 after being overhauled & retooled by “Spiderman: Turn Off The Dark” creative team.

@JoyVBehar
Joy BeharHarold Camping is now saying the Rapture will occur on Oct. 21. Apparently he was able to file for an extension. #Rapture

3 hours ago via Seesmic Web · powered by @socialditto

And joking seems to be to preferred method of talking about Camping’s rapture predictions. Social media monitoring company Crimson Hexagon analyzed over 500,000 relevant rapture discussions on Twitter from May 20th to May 23rd and found that 67% of those tweets were in the form of jokes, humor and sarcasm.

9% were about end-of-the-world parties while 10% were direct knocks on Harold Camping himself. 3% were talking about how they survived the rapture and 3% also said that the whole nopocalypse actually brought people closer to God/religion. 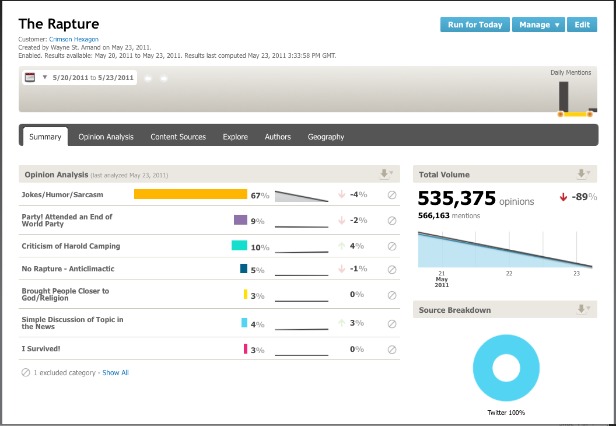 So the rapture is still imminent, my friends. And if Harold Camping has taught us anything it’s that when money is involved never give up on the crazy – you double down on the crazy.

May 24, 2011
Recent Posts
Registration is disabled.