Groupon Sues Groupon to Get Groupon Name in Australia

Last week, it was reported that Groupon was expanding into Australia, but that it would be called Stardeals there, because another deals company had been granted the Groupon name there.

Now, Groupon has revealed that it’s just going to go ahead and sue the Australian Groupon, previously known as Scoopon, which is running now as "Groupon Pty Limited".  Mason says on the Groupon Blog:

The worldwide proliferation of Groupon clones has been well documented (of course, none being more sinister than Nopuorg). One particular clone in Australia called Scoopon, created by the brothers Gabby and Hezi Leibovitch, has been making life difficult for us. Scoopon went a little further than just starting their Groupon clone – they actually purchased the Groupon.com.au domain name, took the company name Groupon Pty Limited, and tried to register the Groupon trademark (filing for the trademark just seven days before us) in Australia.

The way we see things, this is a classic case of domain squatting – an unfortunate reality of the Internet business. As Groupon became internationally known, opportunistic domain squatters around the world started to buy local Groupon domain names, thinking that we’d eventually be forced to buy them at an insane price. In fact, we tried to do just that, reluctantly offering Gabby and Hezi Leibovich about $286,000 for the Groupon.com.au domain and trademark—an offer they accepted. But now they’ve changed their minds, and we believe that they’ll only sell us the domain and trademark if we’re willing to buy the entire Scoopon business from them. Left with no other options, we’ve filed a lawsuit against Scoopon, claiming that their Groupon trademark was filed in bad faith (amongst other things). 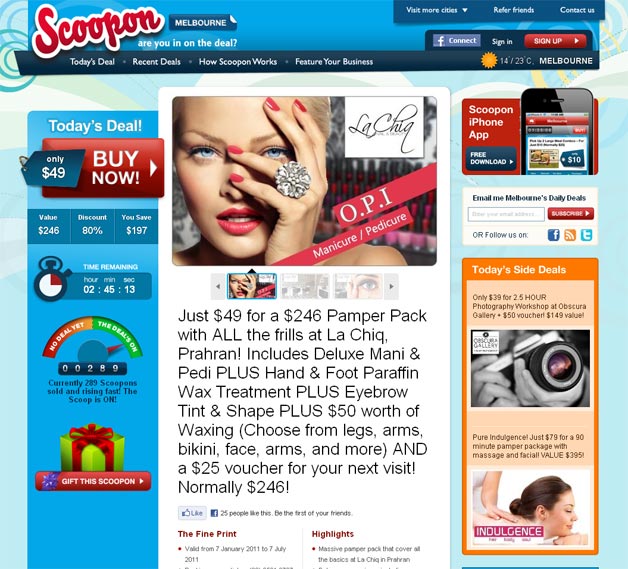 It’s hard to say how damaging this ordeal is to the real Groupon. I’d say quite significant, given the company’s success here in the U.S. The average consumer will probably not now the difference unless they follow online business news on a regular basis, but they may hear the name "Groupon" and simply think the clone is the real thing, particularly if it’s offering a similar service. Furthermore, if that service works for them, they probably won’t care.

It will be particularly interesting to see how the competition shapes up between Groupon Pty Limited and Stardeals in the Australian market until this case is settled.

Mason says the suit could take over a year to be resolved, so either way, the company is in an unfortunate position in Australia. Groupon (the real one) is encouraging users to join a "Groupon in Australia" Facebook group, and post a note asking Scoopon to accept the $286,000 Groupon is still willing to pay.

A Look at Social Signals in Search