When it comes to handling money, citizens of the United Arab Emirates know what they’re doing.  This small federation (115th in terms of total area) actually counts as the world’s 35th-largest economy, according to the International Monetary Fund.  So UAE residents should appreciate the fact that a local version of Groupon has launched.

The site – along with its first deal – went live this morning, just one day after a Chinese version was introduced.  Its layout is identical to that of the original U.S. site, as you can see below. 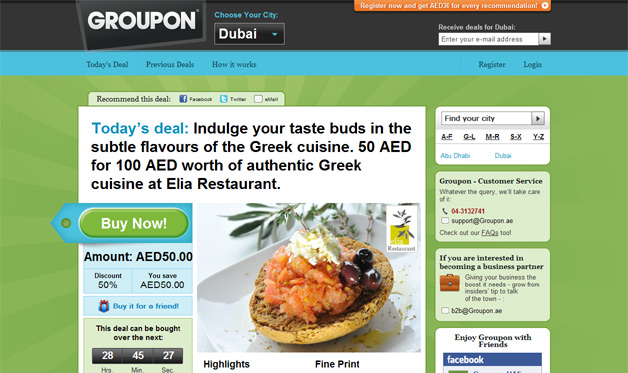 Don’t expect crazy adoption rates; Groupon’s starting small, serving only Abu Dhabi and Dubai at first.  But expansions are planned, and all in all, the company’s quite optimistic about what the new property will achieve.

Faisal Haq, the managing director of Groupon UAE, said in a statement, "The United Arab Emirates represents another incredible opportunity for Groupon and a huge win for both consumers and local UAE businesses.  We are thrilled to be able to deliver the benefits of Groupon to such a diverse and vibrant region of the world."

Rob Solomon, president and COO of Groupon, also said, "Groupon’s expansion to United Arab Emirates is another step in our development as a global Internet brand.  Groupon UAE will change the face of the local collective buying market, leveraging the best practices Groupon has pioneered in more than 40 countries around the globe."

It should be interesting to see where Groupon pops up next.