YouGov BrandIndex shared some findings with us regarding brand perception around Groupon in light of the company’s (what some might refer to as) blunders.

A spokesperson for the firm tells WebProNews, "With two strikes under its belt within 10 days of each other (Super Bowl ad, flower debacle), how’s Groupon consumer perception faring? People love the bargains of Groupon, but they are becoming increasingly dissatisfied with what’s been going on."

"YouGov BrandIndex looked at three scores to get a much fuller picture — buzz (what are you hearing), satisfaction (are you a satisfied customer) and value (does this give you good value)," he says. 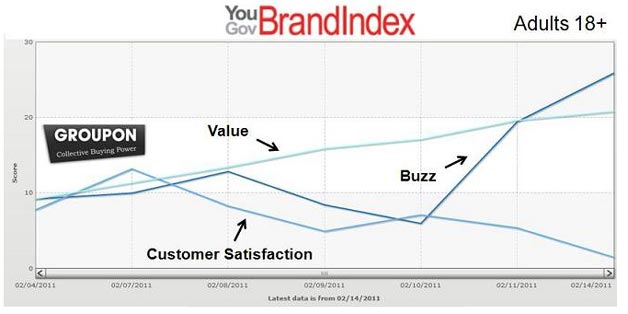 "A score can range from 100 to -100 and is compiled by subtracting negative feedback from positive. A zero score means equal positive and negative feedback," the spokesperson explains. "Until they pulled the Super Bowl ad on Friday, February 11th, Groupon’s buzz and satisfaction scores both fell by half as a result of that controversy. The buzz score has since rebounded to 25.8, which is much higher than the 12.8 score immediately after the Super Bowl."

"Just as Groupon announced the ad’s disappearance, they sent out their latest deal of the day for Valentine’s Day: half off a $40 purchase from FTD," he says. "Instead of love in the air, many people complained publicly that the price of the flowers was inflated for the holiday, and some deliveries were not made in time for the holiday. While the incident didn’t affect Groupon’s buzz score, it sent the company’s satisfaction score into a tailspin, from 7.1 on February 10th to 1.5 on Valentine’s Day."

"Despite these episodes, Groupon’s lure for a great deal has not deterred the public, as its value score has steadily increased these last 10 days from 9.2 to 20.8," he adds.

To give you an idea of YouGove BrandIndex’s process, it interviews 5,000 people every weekday, from a "representative US population sample," conducting over 1.2 million interviews per year. Respondents are drawn from an online panel of over 1.5 million people. The firm claims that its margin of error is "a very accurate" +/- 2%.