Greedo Has Always Shot First, According To George Lucas

Coincidence, or a slyly timed response to one of the most argued changes in the updated version of the original Star Wars trilogy? Read on, and I’ll let you be the judge.

Those three words have summed up the feelings of Star Wars fans ever since Lucas decided it was a good idea to update his classic movies for modern day cinema. Specifically, the words represent the hatred and loathing long time Star Wars fans have for the new versions, with all their CGI trappings. However, Lucas took it one step too far when he transformed Solo into a nerf-herding momma’s boy who let’s people shoot at him first before firing back. In the original he was a cold-blooded gangster who could make a Mandalorian’s heart stop beating just by looking at them, because he shot first and Greedo never shot at all.

There are countless videos like the one below, which have broken down the changes in the scene. This happens to be one of my favorites, which puts all the controversy into perspective.

The backlash has spawned its own sub-culture, where hardcore fans lurk in forums and write position papers about how the single moment changed Solo’s personality forever. Or they just write in one sentence responses to petition websites.

All your petition signatures are for not, as the dark lord has spoken (to THR) and he says Greedo has always shot first. It’s just that the original take was never clear enough who’s blaster pistol actually went off before the other.

The controversy over who shot first, Greedo or Han Solo, in Episode IV, what I did was try to clean up the confusion, but obviously it upset people because they wanted Solo [who seemed to be the one who shot first in the original] to be a cold-blooded killer, but he actually isn’t. It had been done in all close-ups and it was confusing about who did what to whom. I put a little wider shot in there that made it clear that Greedo is the one who shot first, but everyone wanted to think that Han shot first, because they wanted to think that he actually just gunned him down. 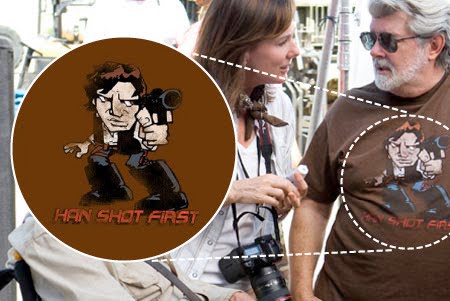 Personally, I think the change has always been unnecessary, but was never deserving of the vitriol it received from fans. The scene is representative of the classic westerns where two cowboys face one another in a stand-off. Han Solo’s character doesn’t change just because the order of shots is changed in a matter of milliseconds. I always thought replacing Sebastian Shaw with Hayden Christensen in the Return of the Jedi’s ending was a much more horrid offense than changing Han’s scene. I guess it’s harder to create a t-shirt campaign based around that though.