The fact that reports of earthquakes (or at least messages reading "EARTHQUAKE!!!") are quick to surface on Twitter is a key reason many people first recognized the site as useful.  Now, the U.S. Geological Survey has decided to have a closer look, unveiling the Twitter Earthquake Detector.

An official page announced, "[T]he USGS is developing a system that gathers real-time, earthquake-related messages from the social networking site Twitter and applies place, time, and key word filtering to gather geo-located accounts of shaking.  This approach provides rapid first-impression narratives and, potentially, photos from people at the hazard’s location." 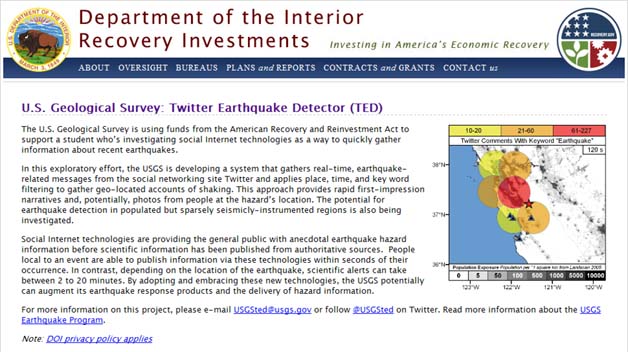 Of course, a few things still need to be worked out.  Alexis Madrigal noted that Dairy Queen offers a brownie earthquake dessert, and if the fast food company ever decided to give some away, the Twitter Earthquake Detector could well interpret the promotion as the apocalypse.

Also, if a devastating quake did occur, the Twitter Earthquake Detector might not pick up on anything in the immediate vicinity, as cell towers would fall and victims would have more pressing things to worry about than getting their computers back online.

Still, this is an interesting use of Twitter, and the data that’ll be gathered could prove useful.

Cell Phone Use May Protect Against Alzheimer