Google neither blew estimates out of the water nor bombed with its second quarter financial report this afternoon.  Shareholders seem to be focusing on the targets the company missed, however, sending the stock down sharply in after-hours trading.

Let’s get the bad news out of the way first.  Google reported earnings per share of $6.45, even though analysts had hoped to see $6.52.  Also, paid clicks decreased three percent compared to the first quarter, which isn’t exactly a positive development.

Google’s stock is down 4.02 percent at the moment as a result. 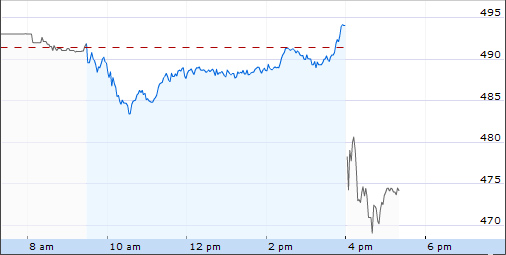 On the bright side, paid clicks were up 15 percent on a year-over-year basis, and while experts expected to see $4.99 billion in net revenue, Google managed to report $5.09 billion.

Another interesting fact is that Google felt confident enough to add 1,184 full-time employees during the second quarter.  And the company’s now sitting on top of $30.1 billion in "cash, cash equivalents, and short-term marketable securities," too.

Eric Schmidt claimed in a statement, "Google had a strong second quarter.  Solid growth in our core business and very strong growth in our emerging businesses drove 24% revenue growth year over year. . . .  We feel confident about our future, and plan to continue to invest aggressively in our core areas of strategic focus."