Google has been rolling out new features for Gmail in mobile Safari for the iPhone. They’ve sped up scrolling to reflect the speed of the swipe gesture, and the toolbars stay on the screen while the user is scrolling, as opposed to moving down into view after each scroll.

Google’s plan was to make Gmail feel more like a native app on the iPhone. "Being able to access your toolbars from any point on the page should make it easier to triage your email and move around the app," says user experience designer Brett Lider. "f you use Gmail in your mobile browser a lot, you may have noticed that we recently tried several different variations of these buttons."

The changes are visible when going to Gmail.com from the browser on the iPhone or iPod Touch devices running Apple’s iOS 4. Right now, it’s only available in English. 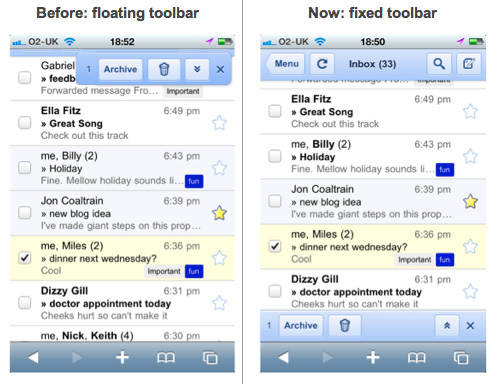 Gmail is one of the clear ways (besides search), where Google can stay in front of users who prefer Apple’s devices to Google’s Android devices, and this will be particularly important as Google ramps up its social strategy. Google wants to keep iPhone users happy, even if they’re going to their competitor for the mobile operating system.

So why not make its apps as iPhone-friendly as possible? Google is also encouraging users to add Gmail to their Home Screens. They’re also reaching out to users, encouraging feedback on their forum or on Twitter with the hashtag #gmailmobile.

Google of course released a special version of Gmail for the iPad when it came out, offering a two-paned user interface to take advantage of the device’s touchscreen.

Making the product as appealing as possible across as many devices as possible is just common sense. It will be interesting, however, to see if Gmail for Android-based tablets gets any special treatment, compared to the iPad version.