Google has been expected to get into gaming for sometime, but now it looks like the wheels are really in motion. The Wall Street Journal reports that Google is in talks with Playdom, EA’s Playfish, and Zynga.

Google was recently reported to have invested a significant amount of money into Zynga, and CEO Eric Schmidt told the WSJ to expect a partnership with the game company. Yesterday, Disney announced that it has agreed to acquire Playdom.

Any efforts in gaming that Google is making are expected to be part of the broader social networking service the company is rumored to be working on (often referred to as "Google Me"). Google Me is supposed to be Google’s answer to Facebook, though Schmidt told the WSJ, "the world doesn’t need a copy of the same thing." Interestingly, Schmidt also said, "Facebook users use more Google products than any other users."

Gaming isn’t the only factor in Facebook’s success, but it is certainly a factor. Hitwise recently pointed out the status of the "games" category when it comes to downstream traffic from Google: 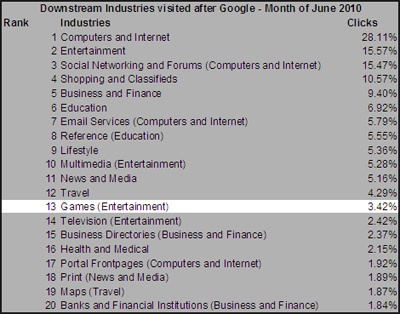 It makes perfect sense that Google would go after gaming. Integration with Google’s "social network" would have implications for a number of other Google products. For example, as the WSJ suggests, Google Checkout could be heavily involved (in terms of virtual goods payments). Obviously Google has numerous advertising options that could come into play. Google accounts in general could get a boost (YouTube users will also be required to have one). Google profiles, which have become more heavily featured in search results.

On a related note, Bing has also introduced some new games.