More so than when a nice, big keyboard is at hand, every moment and character counts when someone is trying to search using a smartphone.   It’s rather significant, then, that universal search features have been introduced to Google Suggest for mobile.

Universal search features met Google Suggest on the desktop in December, and although not revolutionary, they’re useful.  It’s thanks to them that you can see a five-day forecast after just typing "weather," or see the results of a zip code query or currency conversion without going near the "enter" key.

Now the same sort of stuff (including stock quotes, time zone info, and flight data in addition those other universal suggestions) is available to people who are on the go. 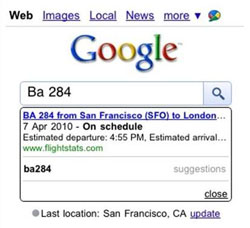 It’s available to lots and lots of people who are on the go, too, considering that Google’s supporting Android devices, iPhones, iPods, and Palm WebOS devices in America.

This may help Google become more popular than ever in the U.S. mobile market; it probably won’t take people long to realize that the second or two that’ll be saved per search will add up over time.

Does Apple's iAd Have the Right Stuff for Mobile Advertising?