Google announced today that it has launched an enhancement for the Google Voice mobile app on Android and BlackBerry devices. The tweak is designed to make placing calls quicker. The feature itself is called "Direct Access Numbers." 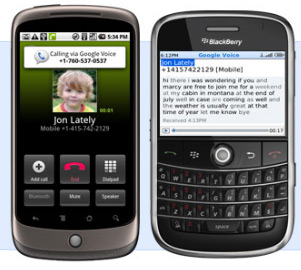 "At Google we are obsessed with speed. Our mantra is faster = better," says Google software engineer Flavio Lerda. "This is true for our Google Voice mobile apps as well. When you want to make a call, your phone should connect you as quickly as possible, whether you’re calling via Google Voice or not."

"Until today, the Google Voice app had to make a request to the Google Voice server every time you wanted to make a call to send us the phone number you wanted to dial," explains Lerda. "Then the call would be connected via a Google Voice access number. With direct access numbers, we assign a unique phone number to every person you call. This means that we no longer need to use your data network to access the server each time you make a call, so calls will be placed much faster."

Last month Google made Google Voice available to everyone, meaning users no longer had to wait for an invitation.

The Android app can be found in the Android Market of course, and BlackBerry users can get the app from m.google.com/voice.