iPhone owners now have another option when it comes to apps that can help them save money.  Almost exactly a year after it became available to Android users, a version of Google Shopper for the iPhone has launched.

Obviously, Google’s a little late to this game on the iOS platform, and the new version of Google Shopper doesn’t offer any fresh, groundbreaking features.  But the app is free, and its functionality is hard to dispute.

To start with, users can "[l]earn more about products and read relevant user reviews," as a post on the Google Mobile Blog explained.  It’s possible to "[c]ompare prices at online and local stores," and "[s]ave and share products for later consideration," as well.

Meanwhile, the real advantage of Google’s tool is that it works off typed searches, barcode scans, or voice searches, which is rather unique. 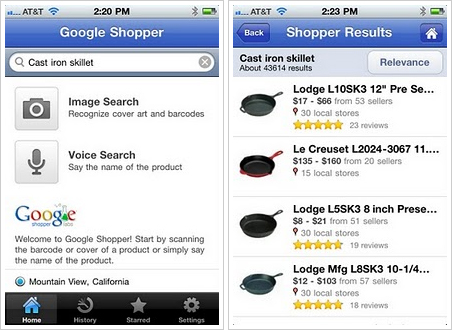 We’re sure at least a few iPhone owners will give the app a try.  Then Google’s no doubt hoping the exposure will improve users’ opinion of its brand, and perhaps nudge them towards trying Android the next time they shop for a smartphone.

Our readers outside the U.S. should just note that Google Shopper’s only available to people in America and the U.K. at the moment.