Google Search Has a New Feature That Lets You Compare Devices

Google is testing out a new feature to its popular search engine that should make gadget or device-related queries even more interesting. Apparently, the tech giant is planning to roll out a device comparison feature that lets you compare the specs of two gadgets at a glance.

Of course, Google has been known to introduce changes to the search engine in the past without prior announcement. It seems that the company introduced the device comparison feature in a similar manner but some observant users were able to note the changes nevertheless. 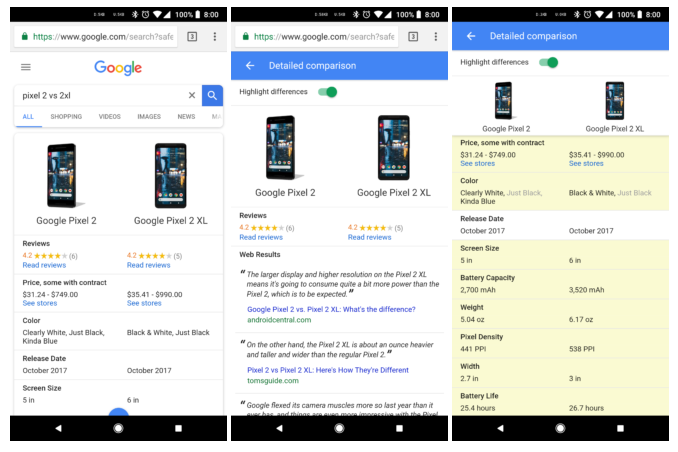 According to Android Police, the device comparison feature is activated by placing “vs” in the middle of the two devices being compared. So, if you want to compare the specs between Google’s latest smartphone offerings, just type “Pixel 2 vs Pixel 2 XL.” However, the feature also lets you compare specs of devices with different brands, which means you can also type an iPhone model and see how it stacks up against its Samsung rival.

After you hit the send button, the search result will show the specs of the two devices in a condensed format, GoAndroid reported. However, the view can be expanded by tapping a blue button to show the full comparison. You can also toggle between the views by pressing the same button.

Right now, the device comparison feature is only available for the mobile version of the search engine. In addition, Google might still be in the process of testing the new feature as some mobile users have reported that they were unable to make side-by-side comparisons on their particular devices.