Google has released what it is calling the Transparency Report, which shows the number of government inquiries for information about users and requests for Google to take down or censor content, as well as interactive traffic graphs that show information about traffic to Google around the world.

Is Google transparent enough for you? Let us know.

"Like all companies, Google’s services occasionally experience traffic disruptions," writes David Drummond, SVP, Corporate Development and Chief Legal Officer. "Our new traffic tracking tool helps us and others track whether these interruptions are related to mechanical outages or are government-induced. Each traffic graph shows historic traffic patterns for a given country and service. Graphs are updated as data is collected, then normalized and scaled in units of 0 to 100."

"This new tool—which is global and includes China—will replace the Mainland China service availability chart, which showed product access for China alone," adds Drummond. "By showing outages, the traffic graphs visualize disruptions in the free flow of information, whether it’s a government blocking information or a cable being cut. For example, the graphs show that YouTube has been inaccessible in Iran since June 12, 2009, following the disputed presidential election."

Google actually created a site for government inquiries about users and requests for the company to take down or censor content back in April. The data is now updated for the first six months of the year.  It also now includes the number of individual items asked to be removed, per country.

Without getting too specific, here is the info Google provides about the requests for the U.S. 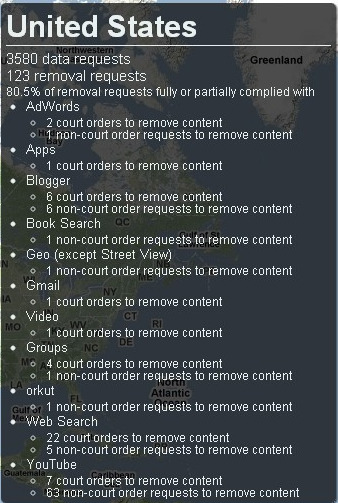 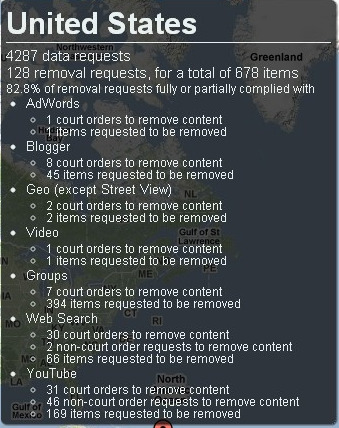 Here’s the info for Brazil: 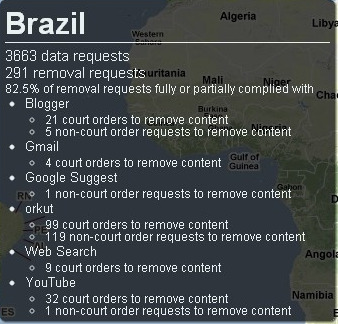 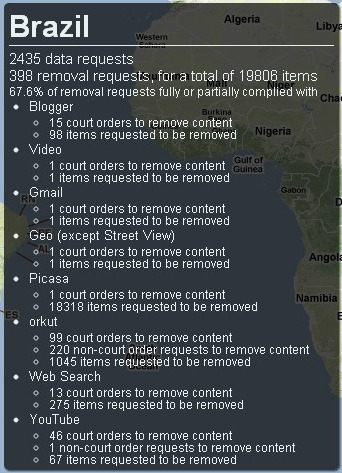 Google acknowledges that the data is not comprehensive. In an FAQ about the data, the company says, "While we have tried to report as accurate a number as possible, the statistics are not 100% comprehensive or accurate. For example, we have not included statistics for countries where we’ve received fewer than 30 requests for user data in criminal cases during the 6-month period. Where the numbers of requests are relatively low from a particular country, revealing the statistics could place important investigations at risk and interfere with public safety efforts of the authorities. For content removals requested by government agencies, we haven’t released specific numbers for those countries in which we received fewer than 10 requests. Many of those one-off requests may coincide with our own content policies, so when the numbers get small enough, they don’t necessarily reflect anything about the level of censorship in that country. Similarly, if a governmental agency used a web form to demand removal of content, we generally have no way of including those reports in our statistics."

The company also says that the stats don’t cover all categories of content removals. It doesn’t count child pornography removals, because Google does this on its own. It also doesn’t count government requests for removal of copyrighted content on YouTube.

The stats also don’t cover all categories of data requests from governments. Google says they primarily cover requests in criminal matters. "We can’t always be sure that a request necessarily relates to a criminal investigation, however, so there are likely a small number of requests that fall outside of this category," the company says. "For example, we would include in the statistics an emergency request from a government public safety agency seeking information to save the life of a person who is in peril even though there is not necessarily a criminal investigation involved. As we improve our tracking, we may add more categories."

The content removal numbers also don’t include any data on government-mandated service blockages, but its traffic graphs do show when Google services have been inaccessible.

Google says it would like to be able to share more data, but "it’s not an easy matter." You can read the FAQ for more explanation on how Google does things.

Are you pleased with Google’s level of transparency? Should they be doing more? Share your thoughts.