It looks like every time Google decides to let a few more people into Google+, they open the floodgates and then immediately regret their decision. The latest round of open invitations came and went last night, leaving people late to the party out in the cold.

At about 10 p.m. yesterday evening, Google+ engineering director Dave Besbris posted an announcement to his Google+ account. He said that they would be opening up invites again for an undisclosed amount of time.

He warned that they will continue to throttle invites, so not everyone that gets an invitation will be let into the field trial –

Things are going well with the systems right now so we feel comfortable enough to open up invites for a brief period. Our goal is to double the user base in the field trial. (Sorry, we’re not giving details about how many folks are in the field trial yet).

So, in a few minutes, we’ll open up invites again.

We continue to throttle invites, so please don’t mass invite folks as it won’t work. If you invite a handful of your most important friends and family you’re much more likely to get these folks into our system.

Thanks again for providing so much wonderful feedback!

I did not see this post, but nevertheless I was granted access to Google+ during this time period. I was allowed in directly through the plus.google.com site. When I was done completing my profile and was taken to the home page, there appeared an icon on the bottom right of the screen that allowed me to invite some friends to Google+. Adria Richards at ButYoureAGirl has a screencap of this – 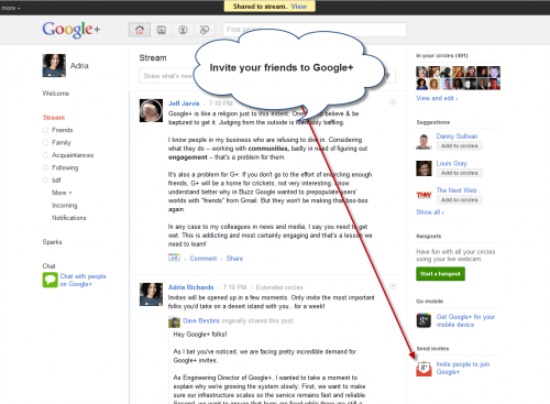 She reports that of the 25 invitations she sent out, 6 reported that they had been let into the social network. I had a similar success rate – about 6 invitations and 1 success.

This invitation icon is now gone, and has been since the wee hours of the morning. Some report that the “brief” window lasted only about an hour.

Why is Google turning the switch on and off so much? In Dave Besbris’ post, he gives this explanation –

As I bet you’ve noticed, we are facing pretty incredible demand for Google+ invites.

As Engineering Director of Google+, I wanted to take a moment to explain why we’re growing the system slowly. First, we want to make sure our infrastructure scales so the service remains fast and reliable. Second, we want to ensure that bugs are fixed while there are still a relatively few people in the field trial.

It seems to be running fine to me. And Google has succeeded in creating massive buzz for their new product. They might not want to take it too far and truly annoy people to the point of disinterest.

Could that happen? Does Google need to start letting more people in? Or are they right to limit the field trial and wait until it is perfect to invite the masses? Let us know what you think.

News of the World Closes Amid Phone Hacking Scandal

No Images of Current NBA Players on NBA.com