Google Offers – Is Groupon in Trouble?

I’m sure you recall when Groupon turned down a reported $6 billion offer from Google a few months back. Many (not all) thought Groupon was crazy to turn it down, considering how many daily deal/offers sites have been coming out of the woodwork, and how easy such a concept is to replicate.

Google made no secret of the fact that it would be aggressively pursuing this market, after Groupon declined the offer. Google’s Marissa Mayer pointed out that they already had some Groupon-like products, but that didn’t include a Groupon clone, per se. That is until word came out about Google Offers in early February, when Mashable obtained an official fact sheet about the product. This week, Google officially announced the beta version of it with a few select cities (Portland, NYC, Oakland, and San Francisco).

It does indeed appear to be a Groupon clone, sending daily deal offers to users via email (which I’m sure is only the beginning). The actual document has been deleted, but it did appear that the service would use Google checkout.

Groupon may have a head start in this space, but Google has several clear advantages (depending upon the extent of which they capitalize on): search, Place Pages, AdWords, AdSense, Latitude, Android, and Gmail come immediately to mind. Then there’s that whole expanding “social layer” thing.

It would appear that Groupon is vulnerable in terms of being the leader in the deals space. Last month, we looked at the narrowing gap between Groupon and its biggest competitor LivingSocial. Articles like this one called “Why Groupon Sucks For Merchants and LivingSocial Doesn’t” probably don’t help too much. That particular article compares the merchant experience of Groupon advertisers to “dealing with a child”. 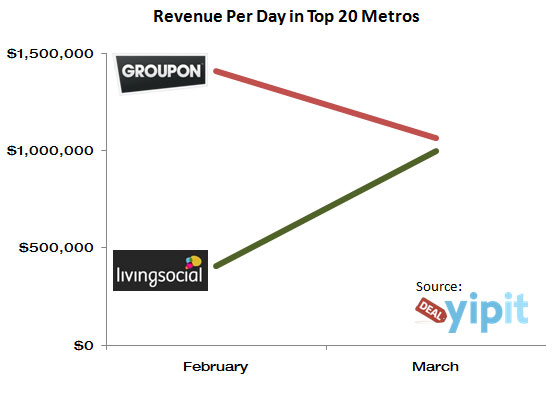 Groupon has been making a name for itself, with some high profile (Super Bowl), if controversial, advertising. But LivingSocial isn’t shying away from TV ads either, and it has some Amazon money (as well as money from others) backing it up.

According to TechCrunch, Groupon just got a new $6 million infusion of capital, following a recent $16.2 million round. Just this week, Groupon also acquired Pelago, the makers of the Whrrl location-based service check-in app. This could turn out to be a huge deal for Groupon, as Foursquare continues to gain traction in the location-based market, as an attractive way to promote local businesses. Of course Google isn’t shying away from that area either (neither is Facebook for that matter), and Foursquare doesn’t seem opposed to the idea of partnering with Google.

Google may be the most dangerous threat to all players in this space. It has an extensive history in local and a slew of tools to help facilitate the success of a local business-based offers product. Even with the search engine’s recent Panda update, local seems to have come out ahead. Having a mobile platform like Android can’t hurt either.

Will Google Offers be a success? Tell us what you think.