People who – deep breath – live in the UK or Ireland, don’t like to get lost, can tolerate beta software, and own a new-ish Android phone are in luck.  An unfinished version of Google Maps Navigation has been made available in the UK and Ireland for Android devices 1.6 and higher. 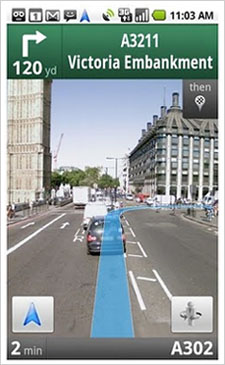 Google’s idea here is to simplify the task of driving around.  A post on the Google Mobile Blog explained, "Like other satnav devices, Navigation includes 3D views, turn-by-turn voice guidance, and automatic rerouting.  But because Google Maps Navigation is connected to the Internet, it also features powerful functionality you can’t get from other satnav services, including the most up to date map, business, and traffic data, access to satellite and street views, and of course, search."

And Google Maps Navigation offers voice search, too, perhaps making the tool safer to use than some alternatives.

Of course, this rollout isn’t exactly huge.  However, the release of something in the UK has often represented the start of a domino effect, with Google offering it in several other countries soon after.

We’ll see what happens.  At any rate, there’s at least a certain segment of the population that should appreciate this development, and Google’s shown it remains interested in the mobile market.