In the aftermath of the earthquake and subsequent tsunami in northern Japan, there has been an outpouring of support from people all over the world – both emotionally and financially. We’ve heard some great stories about how technology has aided the victims, both in the hours immediately following the disaster and the rough days afterward.

In the hours following the original 9.0 magnitude quake, Apple stores in Tokyo allowed people to use their wi-fi to access sites like Twitter and Facebook in the hopes of contacting loved ones across the country. They eventually let entire families of employees sleep in the stores as well. In the days following the initial disaster, Google launched Person Finder, a service that allowed for real time updates on the location of people across the country. YouTube later provided a video companion to Person Finder that allowed victims in shelters to post videos to worried family and friends across the world.

Google has just announced a new site, messagesforjapan.com, to help in the relief effort. On this site, users can write their messages of support to the Japanese people and they will be automatically translated and posted using Google Translate. Along with writing messages, users can easily donate to the relief effort through links to multiple charities such as The Red Cross Japan, Save the Children and Give 2 Asia. So the new site falls into both the emotional and financial support categories. 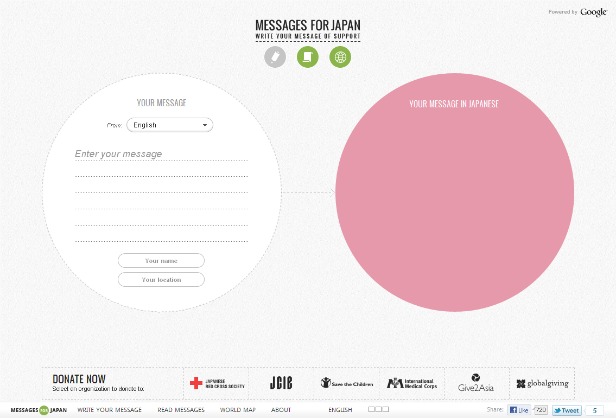 The site’s interface is simple, with three basic options. You can write your messages and have them translated, read the messages as they roll in and access the messages through a global map. Google notes that since the translation will be done automatically, it will not always be perfect. But for me and the many people around the world moved by the disaster, being able to communicate in fractured Japanese language is better than no Japanese language.

On the Google+Blog%29&utm_content=Google+Reader”>official blog post, Google also adds that they have raised over $5 million dollars already through their crisis response page. Good job, humanity.

iPad To Continue To Lead The Tablet Market Through 2015