Two wind farms in North Dakota now enjoy the support of a certain search giant.  Google announced this afternoon that it’s invested $38.8 million in the farms, and believe it or not, this may be a move that both environmentalists and investors can get behind.

In a post on the Official Google Blog, Rick Needham, whose title of "Green Business Operators Manager" itself speaks to striking a balance between environmental and financial concerns, explained, "[W]e’re aiming to accelerate the deployment of renewable energy – in a way that makes good business sense, too." 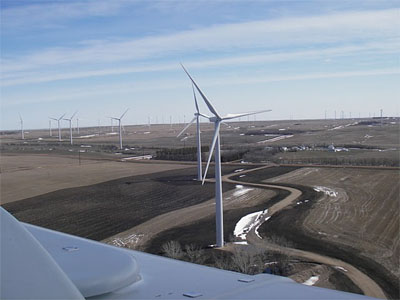 Needham also stated, "[W]e’ve been looking at investments in renewable energy projects, like the one we just signed, that can accelerate the deployment of the latest clean energy technology while providing attractive returns to Google and more capital for developers to build additional projects."

And concerned parties should know it’s not like Google had to get rid of any employees in order to accommodate this investment; the company’s first-quarter earnings report revealed it had $26.5 billion more or less lying around as of March 31st.

One more for-the-record item: for the moment, at least, Google won’t be using either of the wind farms to power any of its data centers.

Watch an iPad 3G Get Microwaved