Google: I Want To Love You, But…

I feel like every Friday I am spending time griping about Google in some way as it relates to the local search market. Well, it seems that way because I am actually doing that. The only reason I rant is because Google supplies fresh reasons all the time.

I mean what I said in the headline. I want to love Google. They do so many things well and they help me with many of their services. I appreciate that. Where they are falling down though is in the SMB / local Internet marketing category because they still don’t get that small businesses are run by real people who don’t give a rip about algorithms and hate being treated like second class citizens.

Just this week, Google put up a pretty new landing page for their Places service. The whole thing ticked me off, so over at Marketing Pilgrim I equated the move to putting lipstick on a pig. A day after I posted that, I thought maybe that was a little harsh. Why? Because Google Places is one of the best options currently for local businesses to be found, despite its many flaws.

Then I got the March 2011 Places newsletter in my inbox. Oh goody! Woohoo! New news about Google Places. I was excited because I felt like I was going to learn something.

Needless to say, this newsletter was so disappointing that I will just have to break it down for you to fully understand just how out of touch Google is. I have numbered the issues and explained them below. It’s somewhat lengthy but you’ll see why I get perturbed at the great Goog. 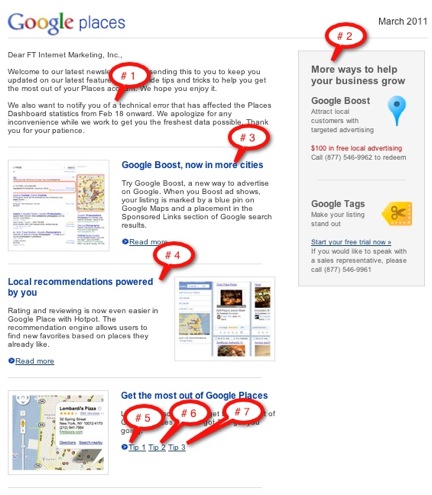 1. This is the real reason that the newsletter went out. Google Places analytics stopped reporting back on February 18th and it wasn’t until enough people started to get upset that a Googler actually said in the Places help forum on March 3rd that they were aware of the problem and working on it. A full 2 weeks went by and the only thing that was being done was complaining by SMBs trying to get the sub-par analytics that are part of the Place Page experience.

2. Google is in selling mode. They have two products to push to the five million or so claimed Place page owners, and this is the warning shot over the bow that they will be pushing the sales button harder than ever.

3. Google Boost has great potential and when you use a line like, “Google Boost, now in more cities,” you expect new news. The old news is that Google Boost is in limited areas and the last update on those cities was in November of 2010. Well, when you hit the “Read more” link guess where you go? To the post from November of 2010! In Internet years that’s like five year old news. Don’t pitch it as if you have something new when you don’t Google! Geesh.

4. Hotpot is also old news if you are paying attention to what is going on with Google’s recommendation engine, and its process to become more “social.” The link for that “news” takes you to a post from December of 2010. A little more recent but there have been updates in that service just in the past few days. At least mention them.

5-7. These are all good solid tips but the first one is how to set up your Place page if Google doesn’t already have one for your business. Not for nothing, but the reason I am receiving this newsletter from Google is because I actually already HAVE my page set up! Oh and the way that the SERP is depicted in the post went the way of the condor back in October of 2010. The other two are good but why not address the issues that are occurring with current Place pages?

Here’s the bottom line. If anyone (Stefan Weitz of Bing are you listening?) could simply get their products and messaging together and fill in the myriad blanks that Google has in this necessary yet greatly flawed offering they could clean Google’s clock in local marketing. That would lead to Google probably loosening its current death grip on mobile search and who knows what else more.

SMBs and the professionals serving them (in this case mostly SEOs) deserve to have more real progress. Right now, with Google Places, you have something that many feel (myself included) could be incredibly important to the small businesses of the world—and the bigger ones too (those like large retailers with local stores in the four corners of the world).

The trouble is that Google apparently has no concept of how the SMB mind works. Why would they since they only hire PhDs and engineers who probably wouldn’t know what it’s like to be a retail shop in Anytown, USA. That’s no excuse, though. Maybe they need to loosen the hiring restrictions a bit and get genuine people to work for them who can then interact with the SMB market and see that they need assistance. Maybe they need to stop thinking that algorithms solve people problems because, in the SMB world, people solve problems.

At any rate I am wondering where Google will finally land on this. Hey, they have said it’s important because local is the future. They put Marissa Mayer on the job. What they haven’t done is their research. They need to come down from the ivory tower that is the Googleplex and mix with the commoners. Sure, they may get a little dirty or have to “buck up” to deal with the people who buy their products and click on their ads and make their enormous profits. If that’s the case, then so be it.

In the meantime, I’m actually rooting for Bing. Someone needs to compete to get Google off its arrogant butt.