In a move that investors and marketers alike should applaud, Google’s figured out another way to make money off the site it bought for $1.65 billion three and a half years ago.  Today, Google explained that it’s come up with a tool to help small organizations advertise on YouTube.

Emily Williams, a member of the Inside AdWords team, explained on the corporate blog, "[W]e’re announcing another new feature in Display Ad Builder that lets advertisers use simple templates to create InVideo overlays and companion ads on YouTube."  (FYI: "An InVideo ad is an animated flash overlay that appears at the bottom part of a video that a user is watching.") 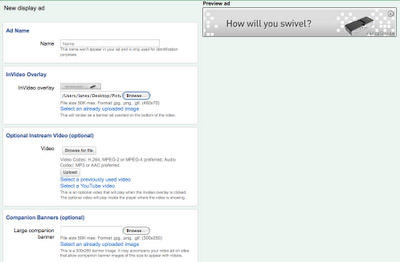 Williams later continued, "Now, any advertiser can use Display Ad Builder to turn their image ads into overlays and run a campaign on YouTube in minutes.  Depending on the type of campaign an advertiser wants to run, overlays can be bought on a CPC (Cost Per Click) or CPM (Cost Per Thousand Impressions) basis, and can be matched to YouTube videos based on numerous criteria (like demographics or content categories), or even on a video by video level."

This could prove to be a very popular option, considering that takeover ads on the YouTube homepage are said to be sold far in advance for hundreds of thousands of dollars.  And the move also earns points for being low risk, since it probably didn’t take much in the way of resources to execute and doesn’t cut any privacy corners.

Now we just get to guess how much Google will actually make from the new feature.  One slightly relevant note: earlier this month, a Citigroup analyst estimated that YouTube will pull in about $1 billion in gross revenue this year.