Prepare to take some pride in what your tax dollars achieve (or decide to disappear into the forests of Canada).  Google’s throwing $5,000 and its PR machine behind a contest meant to show the public how American tax money is spent.

A post on the Official Google Blog explained this afternoon, "Last year, Andrew Johnson and Louis Garcia, two developers from Minneapolis, Minn., created a website called whatwepayfor.com that uses public data to estimate how our tax money is spent.  You enter your income and filing status on the site, and it creates a formatted table of numbers showing your contributions to the federal budget – down to the penny . . ." 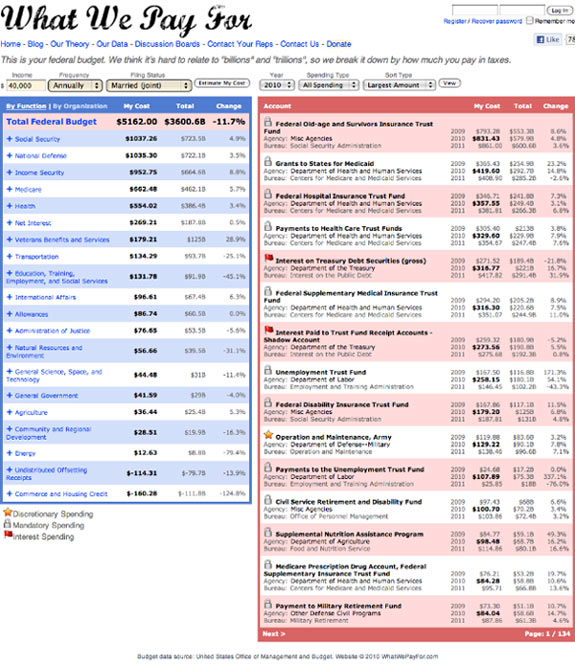 Only – with all due respect to Johnson, Garcia, and the American public – Google wants to make the data easier to absorb.  Pages full of numbers aren’t guaranteed to go over so well with the average individual.

So, the post continued, "[W]e’ve teamed up with Eyebeam, a not-for-profit art and technology center, to host what we’re calling the Data Viz Challenge.  Andrew and Louis have built an API to let anyone access the data, so now you can choose how to display it.  Could you create a better animated chart?  Something in 3D?  An interactive website?  A physical display somewhere in the real world?  We want you to show everyone how data visualization can be a powerful tool for turning information into understanding."

The submission period began today and will close March 27th.  Then a jury will pick the winning visualization, the creator of which will get $5,000 and a fair amount of attention when it’s announced on April 18th (Tax Day).

Let’s just hope the reality of how tax dollars are spent isn’t too depressing.