Update 2: Google has now placed Fast Flip at the bottom of Google News.

Update: Google announced that it now has 2 dozen more publishers representing over 50 publications on board the Google Fast Flip train (which is still in experiment status). New sources include Tribune Co. newspapers such as the Los Angeles Times and the Chicago Tribune, McClatchy Company newspapers such as the Miami Herald and the Kansas City Star, the Huffington Post, Popular Science, Reuters, Public Radio International, POLITICO and U.S. News & World Report.

Original Article: For being nothing more than a "labs" project for Google, Fast Flip has received an overwhelming amount of attention as well as criticism. In case you have been under a rock, Fast Flip is a lab Google launched, that has been talked about before under its codename, "Flipper."

What it does is let you "flip" through news articles on the web, as you would do with a magazine. In Google’s words, "Fast Flip is a new reading experience that combines the best elements of print and online articles. Like a print magazine, Fast Flip lets you browse sequentially through bundles of recent news, headlines and popular topics, as well as feeds from individual top publishers." 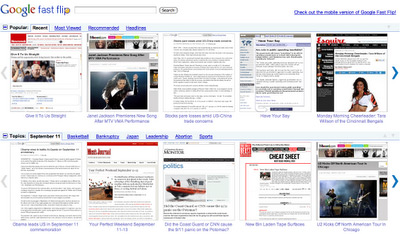 Google partnered with the New York Times, the Atlantic, the Washington Post, Salon, Fast Company, ProPublica, and Newsweek to launch the lab. According to Google, partners will share revenue earned from contextual ads shown with articles. Google says that encouraging readers to read more news is "part of the solution" to the woes of the publishing industry, though the company does acknowledge that there is "no magic bullet."

It would appear that many certainly agree that Fast Flip isn’t a magic bullet either way. Here are a few sample critiques of Fast Flip from around the web:

"It doesn’t seem very fast and also doesn’t flip pages, but slides them across the screen," says David Coursey at PC World. "I want to like anything Google does that makes life easier for readers, but Fast Flip can make news harder to access, not easier."

"I can say with absolute certainty that Fast Flip is fast and it will put more ads in front of the users who use it," says Clint Boulton, at eWeek. "But I’m not sure users are ready for Fast Flip to replace the way they currently view Google News — link by link."

"Overall, Fast Flip just seems like a disappointing product," says Frederic Lardinois at Read Write Web. "The cooperation with content producers is interesting, though we wonder if a single AdSense unit on the site will really make newspapers any money."

Dan Frommer at Silicon Alley Insider has some particularly harsh words for the iPhone version of Fast Flip, which he deems useless. "Unlike on the desktop, you can’t actually read anything. The text is far too small," he says. "And when you click ‘zoom,’ it doesn’t zoom into a version of FastFlip where the text is larger, fitted to the iPhone’s screen size, and actually readable. Instead, it expects you to pan around the page to read the text..No thanks!"

And like in the Blogosphere, there are of course varied opinions of Fast Flip floating around Twitter: 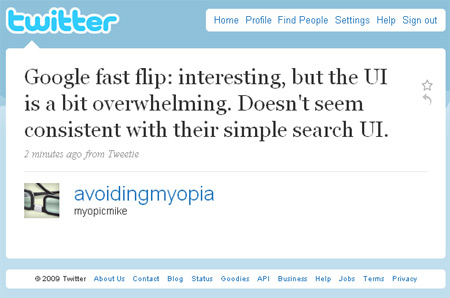 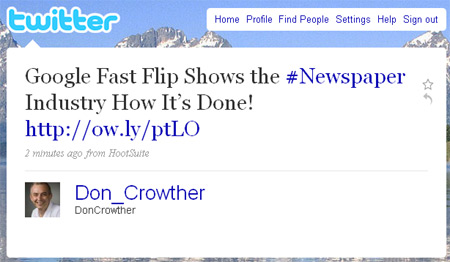 The important thing to remember here is that Fast Flip is just a Google Labs feature. That means it’s not a proper release or a final product, though it is interesting that there are partners making money (allegedly) from the release. Google’s own description of Google Labs:

Google Labs is a playground where our more adventurous users can play around with prototypes of some of our wild and crazy ideas and offer feedback directly to the engineers who developed them. Please note that Labs is the first phase in a lengthy product development process and none of this stuff is guaranteed to make it onto Google.com. While some of our crazy ideas might grow into the next Gmail or iGoogle, others might turn out to be, well, just plain crazy.

Most Google labs releases never make it out of labs status, though there have been exceptions. The fact that partnerships are involved could make the transition to actual release, and maybe a full-fledged feature of Google News, but as long as it’s a lab, it’s not going to be perfect.

Google Shows How People Have Been Searching