Forget scooting forward, typing a fresh search query, playing with the mouse, and then pushing back again between clips.  YouTube Leanback has debuted, and it’s meant to make watching consecutive YouTube videos a more relaxed and uninterrupted experience.

YouTube Leanback qualifies as one of a number of projects meant to take Google into new markets and different parts of the average person’s life.  Consider that Chrome OS is supposed to make a splash on desktops, YouTube Mobile’s targeted at cell phones, and Google TV is supposed to make the company a central fixture in living rooms.

In fact, YouTube Leanback might even turn out to be a sort of beta version of Google TV, since that isn’t too close to arriving.

Anyway, if you haven’t already guessed based on its descriptive name, a post on the YouTube Blog explained that YouTube Leanback, which is itself in beta, "is all about letting you sit back, relax and be entertained.  Videos tailored to your interests play as soon as you visit the site and they play in full screen and high definition, continuously."

As for the interface, everything can be controlled using only arrow keys, and you can get an idea of what the whole thing looks like thanks to the following screenshot, which YouTube sent to WebProNews. 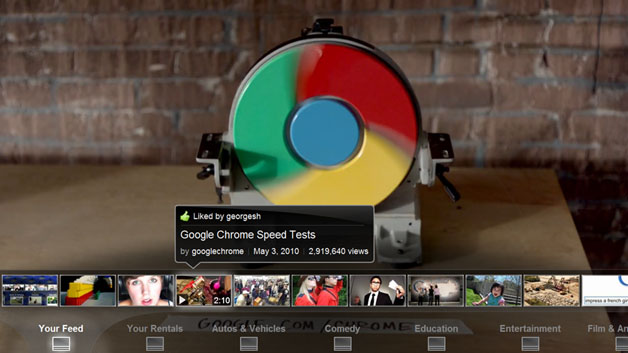 This should go over well with individuals who spend a lot of time on YouTube.  It’s likely to inspire more people to try watching YouTube on a proper TV, too.

Of course, YouTube for Television was introduced in January of last year, and YouTube XL was released about five months later, so Google’s not at all guaranteed to achieve success here.