Today is the birthday is Martha Graham, American dancer and choreographer who is thought of as one of the pioneering minds in the field. Born in Pittsburgh in 1894, she is often compared with Picasso, Einstein and Stravinsky because she “made such radical change through the power of her discoveries.”

The Google doodle today honors her with an animation that showcases 5 dance moves from her influential work. Google worked with the Martha Graham center of contemporary dance to create the doodle.

From right to left, which is the direction the animation moves, it serves as a history of Graham’s most famous contributions to dance.

The “e” is from Graham’s 1930 solo Lamentation. “The innovative costume, a tube of stretchy wool, accentuates the torque and pull of the movement, becoming a sculptural evocation of grief itself.” 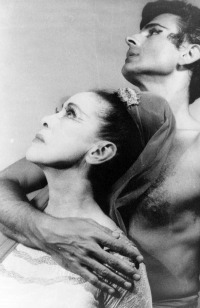 The “l” is from 1932’s Satyric Festival Song. Another solo, “this figure represents the many masterpieces Graham created that grew out of her love of the unique space, rhythms, and culture of the American southwest.”

The “g” comes from the 1944 ballet Appalachian Spring. Her character of the bride here “evokes Graham’s deep American roots, her remarkable relationship with American art and music, and her genius at creating works that spoke of real human concerns.”

The two “o”s are displayed by a jump from 1947’s Night Journey. It is a twisting of classic Greek drama, as “the story of Oedipus unfolds through flashback and memory in the mind of his mother and wife, Jocasta.”

The big “G” is a high kick with a sweep from another one of Graham’s solos, Frontier. It “reminds us of her reverence for individualism and self-empowerment and of her unquenchable ‘appetite for the new.'”

Thanks to the Martha Graham center of contemporary dance for those descriptions of something I pitifully know nothing about.

Graham died in 1991 after creating 181 dances in her life. Head on over to Google to check out the doodle in motion.

May 11, 2011
Recent Posts
Registration is disabled.