Here at WebProNews we have been talking about Google’s new social network quite a bit. And it looks as though we’re not the only ones that are interested in Google+. Apparently, the country is just a-twittered about it.

Pew Research’s Project for Excellence in Journalism put out its New Media Index, which “is a weekly report that captures the leading commentary of blogs and social media sites focused on news and compares those subjects to that of the mainstream press.”

What they found was that for the week of June 27th through July 1st, Twitter was absolutely dominated by chatter about Google+. In fact, it accounted for 35% of the tweets with news links. The closest competitor to its dominance was the topic of global warming, which receive 11% of the attention. 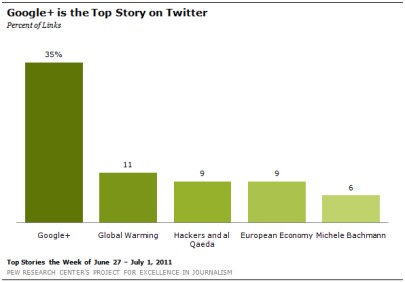 “Tweeters were mostly excited about the new Facebook competitor, especially when it came to the issue of privacy,” says PEJ.

What else is interesting about that graph above? Maybe the fact that Facebook didn’t make the top 5 list.

Last week, two noteworthy things happened in the world of Facebook. First, on June 30th, Mark Zuckerberg announced in his Seattle office that the social network would “launch something awesome” in the following week. That got a lots of internet play, but didn’t seem to crack the chatter on Twitter.

Then on July 1st, the rumors hit the web that the “awesome new thing” was most definitely going to include in-browser video calling powered by Skype.

Of course, those rumors ended up being true this week, but some have taken issue with the whole “awesome” description of the Zuckerberg announcement.

Other interesting finds from the New Media Index? Michele Bachmann was all the rage on the blogs. She formally announced her candidacy for President on June 27th.

And as far as YouTube goes – this video of an alleged UFO in London was the top viewed new video.

People sure do love their aliens.