The idea that Google Buzz poses no threat to Facebook and Twitter is perhaps a popular one; Buzz, of course, got off to a very shaky start due to some privacy missteps.  Interestingly, though, a Google exec claims to agree with the idea, stating that Buzz is supposed to serve a different purpose. 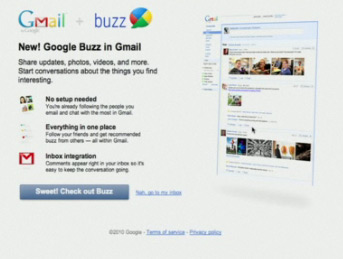 Cynics might argue that Google’s only refrained from declaring social media war because Buzz’s launch went badly.  Or because it would be contrary to the warm and fuzzy impression the search giant likes to project.

Horowitz explained, "[T]his is creating a new category of communication.  It’s filling a niche, which is not currently met in the market.  I think something unique is happening on Buzz that will continue to evolve.  It’s hard to create a trend line or extrapolate too much from six days of use, but certainly conversation and the conversational Web is a place where Buzz has excelled.  I think it is unique and offers a compelling, interesting experience."

For comparison’s sake: Boulton noted that Google Buzz users created around nine million posts and comments during its first week up and running.  On Facebook, users share more than five billion pieces of content per week.

Links Not Always the Best Indicator of Relevance