It has been revealed that Google is testing something called "Google Cloud Picker". It’s apparently not something we’re supposed to know about yet.

According to those who spotted it, it appeared when they tried to insert files and images into Google Sites and Blogger. A screenshot is now making the rounds, showing that it is tied to Picasa, Maps, Google Docs, and YouTube.

A spokesperson for the company told TechCrunch, "Oops… looks like someone pushed some code too quickly. It’s not quite ready for prime time yet but stay tuned!"

Something like this might come in handy when you want to share things. Incidentally, Google is also working on something else that’s not quite ready for prime time (and isn’t expected to be until the Spring – you know, that "social layer" Google is supposed to be adding to tie its products together.

Any suggestion that this is related could only be considered speculation, but it’s something to consider. Another thing to consider is that Google is heavily trying to move people to the cloud. Google made an announcement recently that also connects the better part of Google’s services together through Google Apps.

Something else that is also apparently not quite ready for prime time? Google’s Cloud-based operating system Chrome OS. This very likely has a lot to do with that. In the end all of these things are going to be connected in one way or another, I believe. 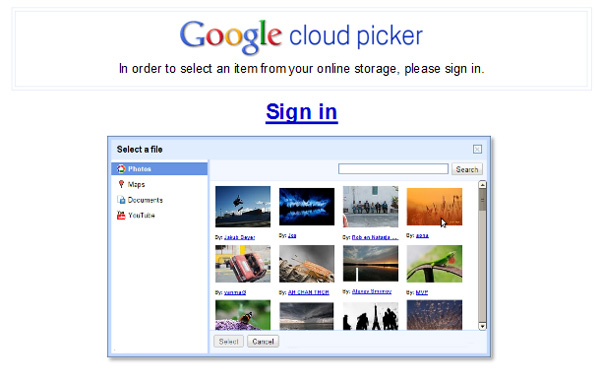 Sarah Perez at ReadWriteWeb drops a name we haven’t heard in a while. "Wait, a Google storage product? Isn’t that Gdrive?" she writes. "Gdrive, the long-rumored Google competitor to Microsoft’s now 3+ years-old SkyDrive cloud storage service has never officially been revealed. But it was supposedly going to do something similar – tie together Google services into one interface."

"Isn’t that what Cloud Picker is doing?" she adds. "Actually, no – at least not to the extent of what Gdrive would have done. Cloud Picker only appears as a pop-up when you go to insert media into Blogger or Sites at this time, according to the forum posts…In other words, it’s a dialog box, not a service."

It certainly seems that way. There’s probably already more being made of this than is really necessary. It would appear to just be a function that could be applied to any Google offering the company wishes. If nothing else, it should make it easy to share different types of content in any given Google service. If you’re inserting a file, image, map, document, or YouTube video into something, you’re probably sharing it with somebody. Sounds social to me.

Google is expected to launch a Chrome OS-based netbook on Tuesday.