Google Buzz Makes It To Gmail For Mobile

Earlier today, we reported that Google Buzz is, in a sense, getting serious – it’s supposed to be integrated with Google Apps in the near-ish future for the sake of enterprise and government users.  But it’s getting sort of casual, too, landing in Gmail for mobile this afternoon. 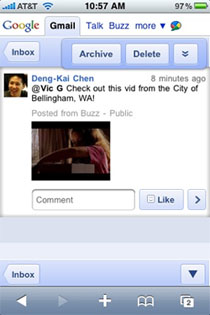 No app downloading or menu digging is required in order to make this combination work.  iPhone and Android device users can take advantage of the development just by visiting Gmail.com.

Then, as software engineer Alex Kennberg explained on the Official Google Mobile Blog, "[Y]ou’ll see buzz in your inbox on your phone just like you do in the desktop version of Gmail, complete with the little Google Buzz icon."

Also, "When you open a buzz post from your inbox, you can perform all the standard functions, such as liking the post or commenting, just as you can from the desktop Gmail inbox."

Making Buzz more accessible might help solve its popularity problem, insofar as current users are liable to act as advertisements for the service while playing around with it in public.  There’s a chance people will transition from being light users to heavy users as they get the option to interact with it more, too.