Many people have pointed to the iPad as a replacement for laptops, or at least netbooks.  Google Docs, meanwhile, is supposed to take on programs like Microsoft Word.  And now the two newcomers can work together more effectively, as Google’s moved to bring the desktop version of Google Docs to the iPad.

A post on the Google Docs Blog explained, "The new mobile editor is fast and lightweight, but sometimes you want to make more style edits like changing a font, or center aligning a paragraph.  If you’re on an iPad, you can do that by visiting the Desktop version of the document editor." 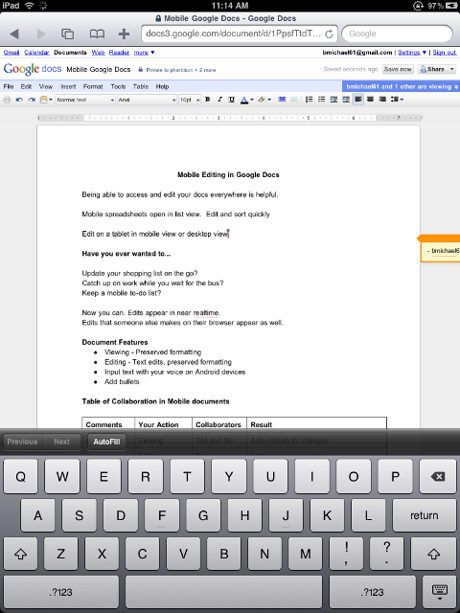 Fair warning: taking advantage of this option may result in decreased performance.  No amount of tweaking on Google’s end will make the iPad as powerful as a desktop, so using the desktop version of Google Docs on a daily basis isn’t recommended.

At least a few students and businesspeople are sure to appreciate the change, however, and it’s possible this development will increase the popularity of both Google Docs and the iPad a little bit.