Google’s paying a whole lot of money to talk to politicians, and the consumer advocacy group known as Consumer Watchdog isn’t at all happy about it.  Consumer Watchdog condemned Google this morning for spending $1.38 million in the first quarter of this year.

That expenditure works out to a 57 percent increase over what Google spent during the same period in 2009, and Consumer Watchdog’s John M. Simpson observed as a result, "Google is relatively new to the influence-peddling game, but they’re now one of the highest rollers in Washington."

Simpson also said in a statement, "Google is seeking laws that let the company do whatever it wants in its quest for record profits.  If that means record sums on influence-peddling, so be it."

Those comments won’t do Google’s reputation much good, and the data is impossible to deny; you can see portions of an official government document for yourself below. 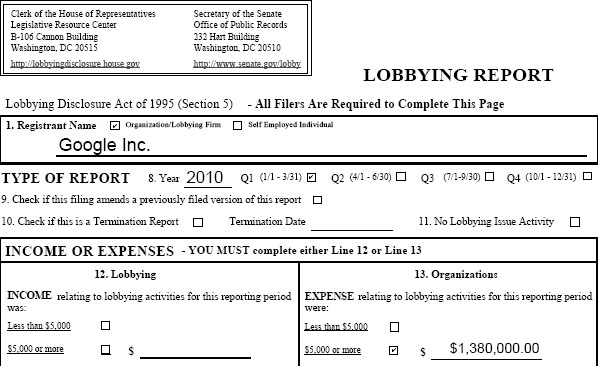 Google might be able to argue that it isn’t just out to make money, though.  Other parts of the document name specific lobbying issues, and they include innocuous-sounding topics like "renewable energies," "health information technology," and "encouraging accessibility of public sector information."