Google Apps Gets Much More Useful to Businesses

Google has widely expanded Google Apps to incorporate many more of the company’s offerings so that businesses and other organizations can use and administrate them more efficiently. Before Google Apps users only had access to a few of Google’s products like Google Docs, Gmail, Google Calendar, and a few others.

Google has changed its whole account infrastructure to allow Apps users to take advantage of many of Google’s other products that regular Google account holders have had access to. Businesses using Google Apps will now have access to the following services in addition to the core services previously available: 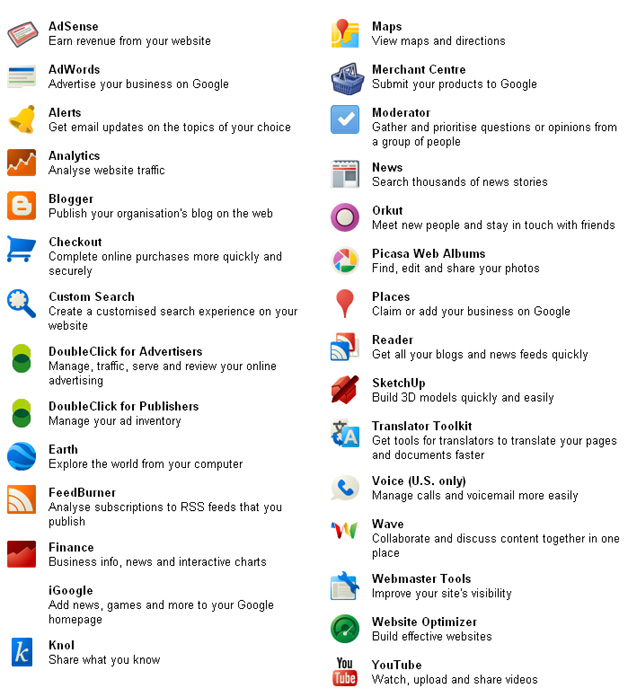 That’s actually not even the whole list. A complete list of Google services that will and will not be included is here. You’ll find that most are included. One thing missing from the new offering is the ability to purchase additional Google Storage, though Google says extra storage for Google Docs and Gmail will be available later this year.

Of course there is the Google Apps Marketplace as well, from which businesses can obtain access to third-party apps.

Now businesses can tie together corporate accounts for Gmail, Blogger, Picasa, AdWords, Feedburner, Google Reader, Checkout, YouTube, etc. The following video explains why this kind of thing might be useful:

"Coupled with the ability for administrators to provide different sets of applications to different groups of users, the possibilities for empowering workers in new ways are remarkable," says Derek Parham, Lead Software Engineer on Google Apps. "For example, you could equip your marketing team with Picasa Web Albums so they can collect and share photos from customer appreciation events, and let that team publish your company’s blog with Blogger. Services like iGoogle and Alerts, on the other hand, may be broadly useful, and could be enabled for your whole organization."

"Existing customers can transition at their own pace over the next couple months to the new infrastructure supporting these applications from the administrative control panel.," he adds. "New customers will automatically have the new infrastructure. The additional services are not covered by the Google Apps SLA or telephone support, but we’ll be watching for feedback how we can make these new applications even more useful."

Google has a guide for getting ready to transition to the new infrastructure here.

Google’s move to include all these services in Google Apps seems like an obvious one now that it’s been announced, especially considering Google’ huge push to get businesses using Google Apps, something the company has probably advertised more than any other product it has (it’s even taken out billboards for it).

Google Apps is bound to be a great deal more appealing to many businesses as a result. This might also turn out to be an important step in Google’s battle against Facebook. Clearly business use makes up a significant amount of Facebook use. Google intends to add a social layer to many of its own products. If those products are all part of Google Apps, which companies are already employing, that they may start to use these products and their respective social layers that much more.

Do you use Google Apps? If not, are you more inclined to now? Let us know in the comments.