Game developers – or at least the game developers who attend the Game Developers Conference in San Francisco – are likely to hold Google and Android in much higher regard after March 9th and 10th.  Google’s announced that it will give away quite a lot of Android devices on those dates.

Google’s employed this strategy to build hype before.  You may remember, for example, that the 4,000 or so people who attended Google I/O received HTC Magics free of charge.  Most folks were quite grateful (and those who weren’t probably became happier after selling the phones for $800 on eBay).

Now, as stated on the Android Developers Blog, "Google and GDC will . . . be providing complimentary Android phones to attendees who register for All Access or Tutorials and Summits passes by the Early Bird deadline of February 4, 2010.  Qualified attendees will receive either a Nexus One or a Verizon Droid by Motorola, so they can quickly apply what they learn from the various Android sessions." 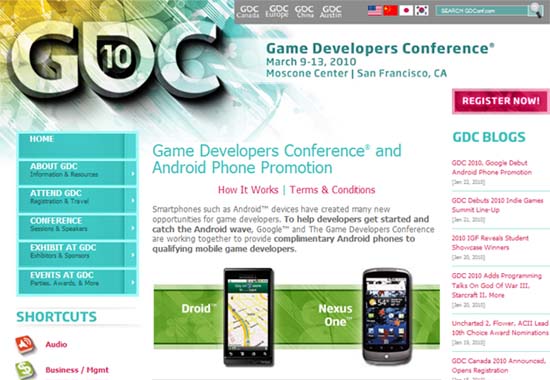 Nice, eh?  And relatively smart, too.  Games are popular with all sorts of people, so if game developers create some good ones for Android, the mobile operating system might seem a little more attractive as a result.

A note to cynics: the only real "catch" concerning this offer appears to be that the Droid and Nexus One recipients "may be asked to take a short 10-15 question survey, post-GDC."

> Google Tries To Carve Out Its Place In Mobile

Big Changes on the Horizon for Digg