Last week, Google launched its Panda update around the world in the English language, while also making some new adjustments to the U.S. algorithm, which the company said would impact 2% of queries (compared to the 12% impacted by the initial Panda update in the U.S.).

Demand Media’s eHow was reported to have been among the top sites negatively impacted by this new round of Panda, in the UK (which is likely indicative of impacts in other countries), and also in the U.S. We looked at data from SearchMetrics to this effect, and then Sistrix put out some data that seemed to back it up for all intents and purposes.

Over the weekend, Sistrix put out a new set of data. “As with our other analysis, the following data is based on observing ranking information before and after the update,” said Sistrix’s Johannes Beus. “The keywords are chosen to reflect an intersection of the local search behavior and we’re quite confident to have a highly reliable data set.”

“Ehow.com got hit this time,” he added. “They were among the sites at which the farmer [Panda] update was aiming but somehow survived the first round. Like in the UK, they lost massive visibility in the US since this week.”

He shows the following data: 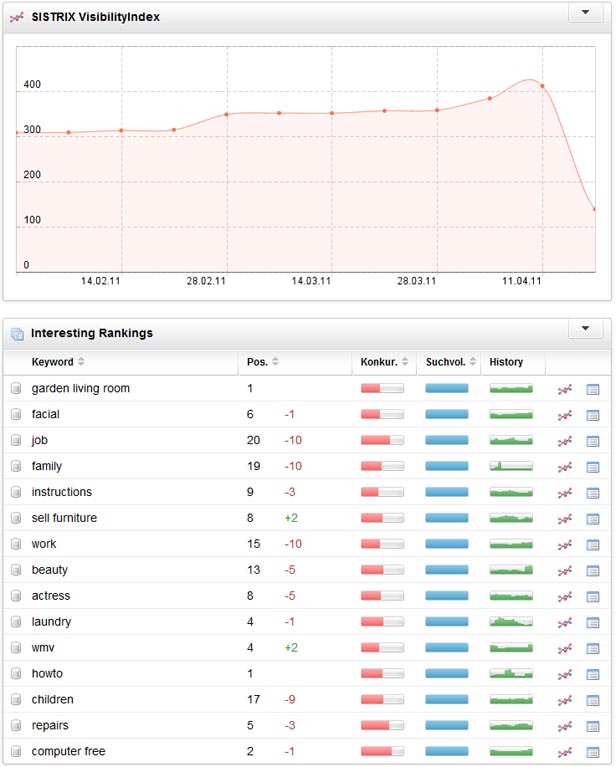 Apparently in response to this report, Demand Media decided to put out a press release addressing the situation after staying quiet about it throughout the week. The company said it’s reaffirming its financial outlook for fiscal year 2011. Here’s a snippet of the release:

“Certain third parties that have published reports attempting to estimate the effect of recent search engine algorithm changes made by Google on traffic to the Company’s owned and operated websites have significantly overstated the negative impact of those changes on traffic to eHow.com, as compared to the Company’s directly measured internal data. Recent search engine algorithm changes have negatively impacted search driven traffic to some of our websites, including eHow.com, resulting in moderately lower year-to-date page view growth for the Company’s owned and operated Content & Media properties compared to page view growth rates before the algorithm changes. Nevertheless, the Company currently expects that its year-over-year page view growth across its owned and operated Content & Media properties in the second quarter of 2011 will be comparable to, or greater than, the year-over-year page view growth achieved in the second quarter of 2010.”

Larry Fitzgibbon, Demand Media’s EVP of Media and Operations, followed up the release with another Statement about the algorithm changes. “With respect to Panda’s mid-April update, some of our properties saw Google search referrals move up while other properties, including our largest property eHow.com, saw these referrals go down,” he wrote.

“Organic growth in visits from non-search sources to eHow continue to grow rapidly and Cracked.com is now the most visited humor site on the Internet with the majority of its page views coming from direct visits,” he said, adding that improvements have been registered from the recent eHow redesign and new video series. These have led to “significant growth in Facebook likes,” he said.

According to Fitzgibbons, Demand Media’s brand advertisers have been reporting “encouraging results” as well.

Beus did follow up Demand Media’s response with an update to the Sistrix report, saying, “Demand Media has published a statement where they point out that traffic to ehow.com hasn’t declined 66%. I’d like to emphasize that although our data usually correlates quite well with actual traffic numbers it is a view from the outside and Demand Media’s own data is of course correct.”

Still, the new algorithm changes must have caught the company off guard, particularly, since eHow had escaped and even benfited from the original Panda update. When Google announced the new changes, it also noted that it was using the domain-blocking feature as a ranking signal in “high confidence” situations. Given that eHow is arguably the most-referenced site in content farm discussions, it’s not hard to imagine it also being one of the most-blocked. It’s entirely possible that this played a major role in eHow’s search visibility decline.

Back in January, when Google started talking about tackling the content farm issue, Demand Media CEO Richard Rosenblatt talked about his company’s relationship with Google in an All Things Digital interview. “1) We help them fill the gaps in their index, where they don’t have quality content. 2) We’re the largest supplier of all video to YouTube, over two billion views and 3) we’re a large AdSense partner. So our relationship is synergistic, and it’s a great partnership. And it’s a partnership that we’re excited to continue to expand.”

Of course Google has made it clear that being an AdSense partner has absolutely no influence on search rankings. In fact, many of those negatively impacted by the updates used AdSense heavily.

Demand Media’s stock has been on the decline since the update. At the time of this writing, it’s down to $17.66 a share. The company will report its first quarter earnings on May 5.