So long as German competition authorities prove agreeable, it seems that Google will soon be in part responsible for powering the lights (and computers) at a number of German homes.  Google announced this morning that it intends to invest about $5 million in a local solar photovoltaic power plant.

A note to cynics, worrywarts, and shareholders: this move isn’t as random as it may seem.  Although it does mark Google’s first clean tech investment outside the U.S., the company’s done a lot with wind power in the past – including making a $38.8 million investment in two wind farms – so it’s not as if new CEO Larry Page is acting in an unprecedented manner.

Google isn’t even taking the lead with respect to this one solar plant, for that matter, considering its $5 million investment should buy the company just a 49 percent stake. 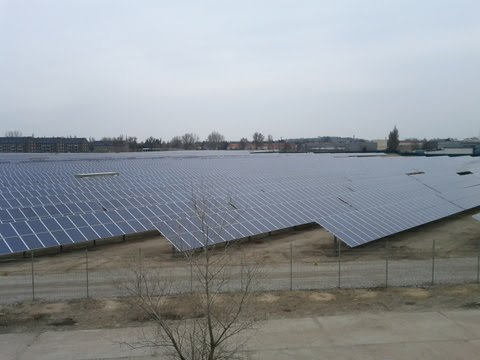 Anyway, the plant is one of Germany’s largest, and is located in Brandenburg an der Havel, a town near Berlin.  According to a post on the European Public Policy Blog, it covers a site that the Russian military used as a training ground through the early 90s.

Otherwise, the post declared, “The power plant has a peak capacity of 18.65MWp . . . .  This facility will provide clean energy to more than 5,000 households in the area surrounding Brandenburg.”

Google jointly invested in the solar plant with German private equity company Capital Stage, by the way, and it wouldn’t be too surprising if other outside-the-U.S. clean tech investments follow.