AdMob released its Mobile Metrics report for May, which focuses on changes in the mobile market over the course of two years. Unsurprisingly, a lot has changed. While AdMob’s network traffic itself has grown a lot in that time, the company says there continues to be strong regional differences with devices used to access the mobile web. 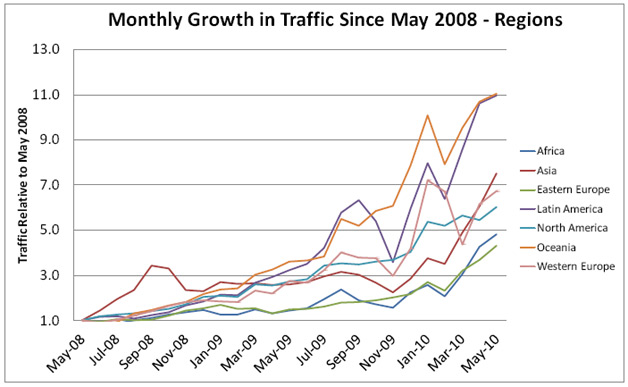 Other highlights picked out by the company include:

– Traffic from North America, Asia, Western Europe, Latin America and Oceania all increased by a factor of at least 6x from May 2008 to May 2010.

– Motorola feature phones were the top three devices in AdMob’s network in May 2008, but in May 2010 the only Motorola device in the top ten was the Droid.

– The Top 5 iPad countries in AdMob’s network, based on the number of unique devices, were the United States (58 percent), Japan (5 percent), United Kingdom (4 percent), China (4 percent), and Canada (3 percent).

– A year ago, the HTC Dream (G1) was the only Android device broadly available.  In May 2010, the leading handset, the Motorola Droid, had only 21 percent of the Android users in the AdMob network demonstrating the broad range of Android devices available.

Remember that all of the findings mentioned are based solely on data from AdMob’s own network, which is quite large, but not all encompassing. Much of the data, however, pre-dates AdMob’s acquisition by Google.

The entire report can be found here.

Hulu Plus Launches for Ten Bucks a Month