Good News and Bad News For Marketing With Instagram

These days, if you’re not marketing on Instagram, you’re likely missing out, but at the same time, things aren’t as rosy in that department as they once were. For those trying to get more marketing bang from the photo and video sharing service, there’s good news and bad news, and the bad news is probably only going to get worse.

Have you found success in Instagram marketing efforts of late? Have things gotten harder than they used to be? Discuss.

Locowise released its latest findings on the subject of Instagram marketing, looking at the performance of 2,500 Instagram profiles over the course of January.

The good news is that they found Instagram follower growth rate to be at its highest level since August, which they consider to be good news for brands trying to grow organically. The news is even better when you consider that the prior month saw the smallest growth rate since Locowise has been analyzing it. There was a 60.87% difference from December to January.

“Having ‘audience size’ as one of your KPI’s is not the most appropriate way of measuring performance,” says Locowise’s Marko Saric. “It’s very difficult to grow much without spending money on advertising, no matter how great your organic content efforts are. It’s worth considering this when setting your goals and targets for the year. Engagement rate may be a metric that helps you measure the results of your efforts better.”

And that’s where the bad news comes in. Engagement rate is down by 66.07% on Instagram over the past ten months. It fell by 12.04% just from December to January. And why is that, you ask? Most likely because of ads. 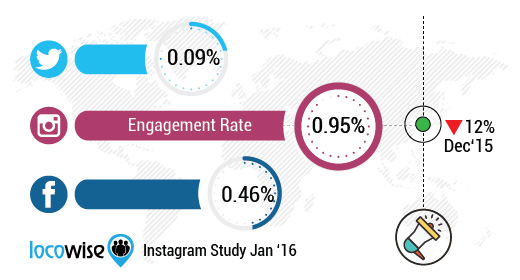 Instagram announced last week that it now has over 200,000 advertisers with 75% of them outside of the U.S. The company says this includes businesses of all sizes in over 200 countries.

“Instagram is a place where people come to be inspired and [find] things they care about, and that includes content from businesses,” a spokesperson told WebProNews in an email. “In fact, 60% of Instagrammers say they learn about products and services on Instagram and 75% say they take action after being inspired by an Instagram post—like visiting a website, searching…or telling a friend.”

“It’s not just major brands that are seeing success on Instagram,” the company says in a blog post. “PetLove, an online store for pet products based in Brazil, wanted to increase downloads of its mobile app. After seeing success with Facebook ads, they ran a mobile app install ad on Instagram using the same targeting as their Facebook campaigns. After the campaign ended, PetLove saw a 30% lower cost per install compared to other channels.” As we discussed in an article last month, Instagram has been making some significant improvements to its marketing offerings, including longer campaign options, longer videos, video view counts, and multiple account support.

Videos on Instagram haven’t been performing as well as photos in terms of engagement, according to Locowise’s findings, but the time users spent watching videos increased by over 40% over the past six months. The firm found that 91.83% of all posts in January were images, and image posts engaged 0.97% of their total audience compared to video posts, which engaged just 0.68%.

In addition to the aforementioned video-related improvements from Instagram, the service is also promoting video views by curating videos related to live events. Look for them to do even more with video as time goes on.

Do you expect to put more or less time and resources into marketing with Instagram? Let us know in the comments.