Good, creative marketing can be simplified into "four E’s": engage, educate, excite, and evangelize. That’s how former Kodak Chief Marketing Officer Jeff Hayzlett presents it anyhow. Obviously, each of these "E’s" can get complicated in themselves, but if you really want to look at it in the simplest form possible, this is as good a place to start as any.

Hayzlett, who also authored a book about this stuff called "The Mirror Test," advises that you look at who you are in the mirror for inspiration. "Who are you in the mirror?" he asked. "Look pretty in the mirror….You can’t be cool and look like Elmer Fudd."

"A brand is nothing but a promise delivered," said Hayzlett. "The promises that we deliver are different." In other words, figure out what you want to promise consumers and go from there. You may have a similar product to your competitors, but you can still take a different angle on your promise that can make them look at you in an entirely different light. 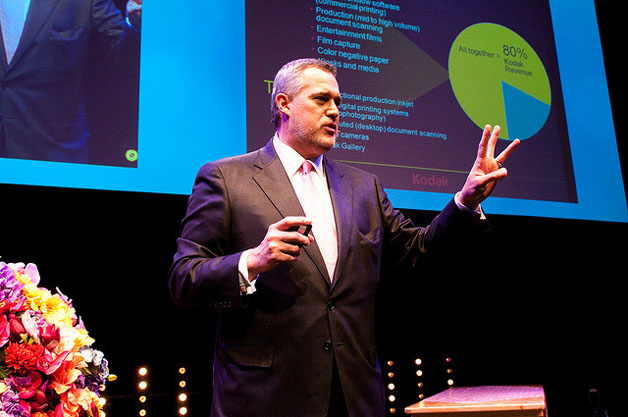 He also recommends keeping your "elevator pitch" to 118 seconds at most. After listening to many pitches on the exhibit hall floor at at:tech NY, Hayzlett said, "Many of you must be in much taller buildings than I am."

If you’re a marketing leader in your organization, you should be creating tension, he says. "Shouldn’t we be causing tension in the operation…getting into healthy debate?"

Tension generally arises when there are risks involved, but that’s ok. "What happens if you make a mistake? No one’s going to die," he said. Learn from it.

Hayzlett had some interesting things to say about social media.

"Social media’s been around forever," he said, adding that people frequently say that the people are now in control, but that they were always in control. "Now they can actually write something and you’re paying attention to it."

And you better be paying attention to it. If someone is cursing your brand, you’re going to want to know about those conversations. The ROI of social media is constantly questioned within organizations. "You tell me what the return on ignoring is, I’ll tell you what the return on investment is," said Hayzlett.