GMC has launched the “GMC Never Say Never Moment of the Week,” in partnership with the NFL and ESPN that allows football fans to vote on the best moment or play of the week that represents determination at nfl.com/gmc.

Each week fans will be able to vote on three "Never Say Never Moments," and they can also enter for a chance to win a weekly prize of a trip for two to Super Bowl XLV in Arlington, Texas.  At the end of the season fans will have the chance to choose the “GMC Never Say Never Moment of the Year,” from the 17 weekly winners. In addition, one grand prize winner will receive the new 2011 GMC Sierra Denali. 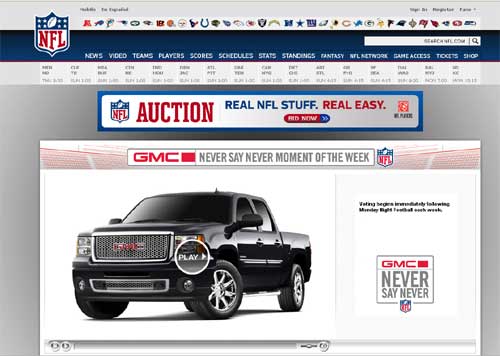 Fan voting will begin 45 minutes after the end of the each Monday Night Football game and will close at noon on Friday of that week. The winning moment will be announced on Friday during the NFL Network’s "Around the League" show.

Fans will be able to view all the moments on nfl.com/gmc and on GMC’s Facebook Fan page. Fans can also watch the three nominated "Never Say Never Moments of the Week" on the NFL Network’s "Around the League" that airs on Wednesday and Friday and on ESPN’s "SportsCenter" that airs on Tuesday.