Worldwide mobile data bandwidth usage increased by 72 percent in the second half of 2009, according to a new report by Allot Communications.

Applications such as YouTube and Skype are driving this continued momentum in mobile broadband growth. APAC leads the growth with 86%; EMEA posted 70% growth and the Americas 59%.

The report found video to be the single most influential factor driving the need for increased mobile network capacity. P2P remains the biggest cause of cell congestion in the top five percent of cells, mobile broadband networks are still facing the same issues as fix networks– growing bandwidth demands, congestion, as well as finding ways to improve the user experience and to lessen the negative impact of a few subscribers on the network. 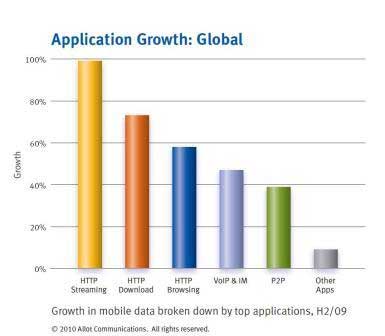 Highlights from the report include:

> Usage of Mobile Web and Apps Doubles in 2 Years