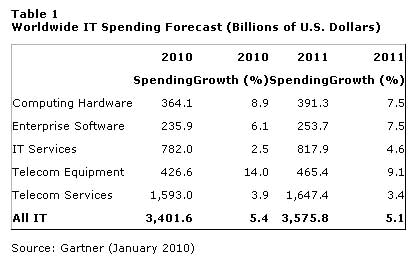 “Aided by favorable U.S. dollar exchange rates, global IT spending growth is expected to exceed 5 percent in 2010, but a similar level of growth in 2011 — while forecast — is far from certain, given continued macroeconomic uncertainty," said Richard Gordon, research vice president at Gartner.

"While the global economic situation is improving, the recovery is slow and hampered by a sluggish growth outlook in the important mature economies of the U.S. and Western Europe. There are also growing concerns about the ability of key emerging economies to sustain relatively high growth rates. Nevertheless, as well as a fundamental enabler of cost reduction and cost optimization, investment in IT is seen increasingly as an important element in business growth strategies. As the global economy repairs itself in coming years, we are optimistic about continued healthy spending on IT."

The computing hardware segment is forecast to grow 7.5 percent in 2011, but Gartner analysts said vendors face possible challenges, particularly in the area of PC growth, given likely weak economic growth through the first half of 2011.