Global Internet Use Not Yet Universal

Going online in many countries, including developed ones is far from universal according to a new report by the World Internet Project (WIP).

The report was carried out by the Center for the Digital Future at the USC Annenberg School for Communication & Journalism, it found only half of the 10 reporting countries had more than a majority of Internet users.

Only three countries and regions report more than 60 percent of respondents as Internet users: Macao (61%), the United States (78%) and Sweden (80%). 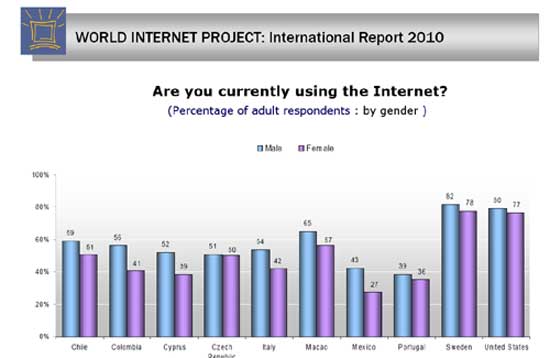 "These findings reinforce that the Internet is not yet part of life for hundreds of millions of people around the globe — even in technologically advanced countries," said Jeffrey I. Cole, director of the Center for the Digital Future, which created and manages the World Internet Project.

"And we are seeing large numbers of non-users even in countries with high levels of education and employment, long histories of Internet use, and high percentages of broadband installation."

In four of the WIP countries, the gap in Internet use between men and women is four percent or less, with the Czech Republic, Portugal, Sweden, and the United States reporting only slightly higher percentages of men than women as users.

"Countries that reported an average of five or more years of Internet use found key disparities in access to online technology," said Cole.

"For example, many countries have a long way to go to increase Internet equality among men and women."

Does Google Buzz Deserve All the Criticism It's Gotten?