If someone were to ask you to name the trendy social services right now, more than likely they’d say Facebook, Twitter and Foursquare… as those seem to be the “big 3”. They’re interchangeable – as some would select GoWalla over Foursquare and MySpace over Facebook, it’s subjective. Fairly soon you might start hearing another service joining the ranks of the social elite, GetGlue.

Much like Foursquare, minus the creepy geo-location aspect, GetGlue allows users to check in to movies they’re currently watching, books that they’re reading, and the music that they’re listening to. There are also other check-in options pertaining to wine, celebrities, video games and general topics of discussion. “We wanted to build a place that glues friends & fans together around things they love,” GetGlue founder and CEO Alex Iskold told WebProNews. 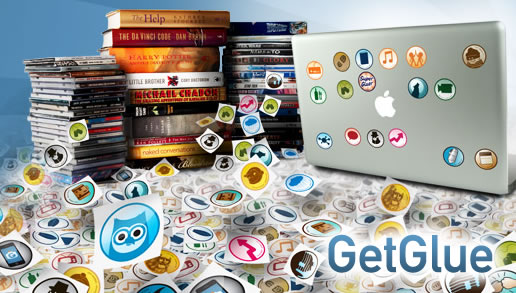 Do you currently use GetGlue or any other check-in service? Let us know.

Most check-in services, GetGlue has built in gaming elements like badges, points and even physical stickers. When a user has been awarded seven different profile stickers, they can request a copy of their stickers – free of charge. “Two things make GetGlue stickers unique” says Iskold.  “First, they are physical, tangible rewards. The interplay of digital and digital is fascinating. In addition, they are branded – authorized by FOX, HBO, Showtime, and others. This makes them very real and very meaningful. Its not just some digital bling you got, it is a thank you from the brand you love.”

GetGlue began 2010 with approximately 30,000 users; currently the site has over 650,000 registered users. As you would expect, September was the biggest month to date, with over 10 million ratings and check-ins. According to Iskold, mobile is very critical to their strategy, with mobile accounting for over 70% of total check-ins. GetGlue currently features an iPhone, iPad and Android App.

One thing that sets GetGlue apart from their competition is the partnerships with major media brands and their reach. Iskold tells WebProNews, “We have been fortunate to work with over two dozen of top entertainment brands. Our first partner was Showtime, followed closely by HBO, our biggest partner. FOX, ABC Family, USA, Syfy, AMC, Universal, Sony pictures, PBS, Discovery, Random House, Penguin and many others are offering rewards to GetGlue users.”

Upon analyzing GetGlue’s partnerships Iskold says, “There were a couple of very interesting things we learned… brands love our concept of ad-without-an-ad. When someone shares that they are watching Mad Men, that’s effectively an ad for the show, but no one perceives it as an ad. This is a genuine connection around people’s watching habits. And when you take thousands of such check-ins, you get millions of friends, and followers reached through Facebook and Twitter. This quickly becomes very powerful way for brands to reach fans and provide incentives for tune-in.”

Recently GetGlue announced an exclusive partnership with HBO for fans of their hit show True Blood. For a limited time, fans that check in to the show will receive a 10% discount at HBO’s online store for True Blood merchandise. Fans with a higher check-in status can receive up to 20% off products, with one lucky individual getting a $50 gift card. If you miss out on this offer, don’t worry more are promised, “Social entertainment market is heating up and we are leading the way. We have a ton of very exciting product ideas that you will see later this year and in 2011."

In the near future, Iskold wants to continue partnering with bigger brands – he even wants to help lower the cost of your cable bill. “I’m envisioning a service where if you check in a certain number of times, you could get $10 off of your monthly cable bill.”

Do you think GetGlue will ever be mentioned in the same sentence as Facebook, Twitter and Foursquare?  Tell us what you think.

No Real Social Media Plan? Try Starting With This.

One Thing Small Businesses Can Do Just as Well as Walmart