There’s more good news for Google and the specific teams that support Android this morning.  Gartner’s released some stats concerning the sales of smartphones in the second quarter of this year, and it looks like Android has become the number three mobile operating system in that respect.

Gartner explained in an official statement, "In the smartphone operating system (OS) market, Android expanded rapidly in the second quarter of 2010, overtaking Apple’s iPhone OS to become the third-most-popular OS in the world."

As the table below shows, Android will secure second place if current trends sustain themselves for any length of time, too. 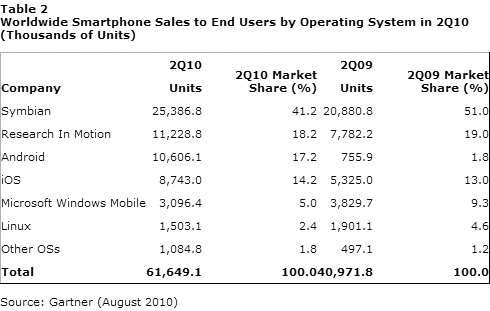 What’s more, setting aside all the global data, Gartner indicated, "In the U.S, [Android] also overtook RIM’s OS to become the No. 1 smartphone OS in this region."

It’s hard to imagine how things could go any better for Google.  The only thing the search giant has to worry about is the fact that the iPhone 4’s launch isn’t covered by this data (it occurred after the end of the second quarter), and that represents a significant opportunity for the iOS to regain some ground.

The third quarter should be a very important period for Google (and Apple), then, perhaps determining the shape of the smartphone market for at least a year or two.