According to a new report, Android will soon secure a spot as the number two mobile operating system worldwide, passing Research In Motion.  What’s more, Gartner, which prepared the report, has Android poised to take the overall lead from Symbian in 2015.

Let’s cover the near-term figures first.  Gartner believes Android will exit 2010 with a market share of 17.7 percent, just ahead of Research In Motion’s 17.5 percent.  Symbian, meanwhile, is supposed to hold a market share of 40.1 percent. 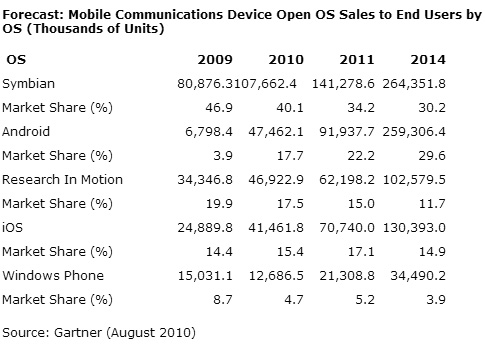 This is all good news for Google, to say the least, considering Gartner’s reputation.  Apple fans and shareholders, meanwhile, will have to consider how happy they are with the idea of a steady market share of around 15 percent.

Microsoft supporters will have even more thinking to do, since Gartner’s stats give it almost no chance of succeeding in the mobile market.

Roberta Cozza, a principal research analyst at Gartner, stressed in a statement, "[W]e believe that market share in the OS space will consolidate around a few key OS providers that have the most support from CSPs and developers and strong brand awareness with consumer and enterprise customers."

13 Ways to Sabotage Your SEO Opportunities